In this tutorial, we build a spam email detection program based on Machine Learning (ML). We use the Naïve Bayes Classification Algorithm in this program.

In machine learning, the computer is fed with examples of data. It then figures out the connections within the dataset and how to use those connections to help it to accomplish its set objectives.

In this tutorial, we are going to be using the supervised approach of machine learning. We will teach a computer how to distinguish between spam email and authentic email.

In supervised learning, the programming starts by first providing the computer system with numerous examples of data. Each example contains selected features and their corresponding target values. After providing this data, we expect the computer to find the best mathematical model that can accurately represent the given data set. When we give it the features of another example that is not in the data set, it can then accurately predict the target value of that given example.

In an example of supervised learning, you provide a computer system with data on the size of houses and the corresponding prices. The expectation is for the computer to find a mathematical model to accurately represent this data. Then, when you provide it with an example containing just the size of a house, it can accurately predict the corresponding price of that house.

Naïve Bayes Classification is a probabilistic classification method.  It works based on applying the Bayes theorem with strong independence assumptions between the features of each example in the input data.

The Bayes theorem is a concept in probability theory that describes the probability of an event occurring based on prior knowledge of conditions that might be related to that event. Fig. 2 shows the mathematical representation of the Bayes theorem: 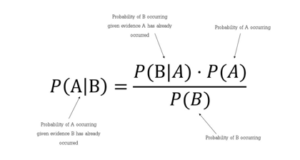 How to Apply Naïve Bayes Classification to Spam Email Detection

We can read and interpret the mathematical expression in Fig. 3 as ‘the class c of email that yields the highest probability given an email e’.

We obtain the probability of spam emails, given the input data, through the following means:

However, we obtain the probability of legitimate emails, given the input data, through the following means:

The P(Wi | C) in the mathematical expression in Fig. 5 signifies the probability of a particular word belonging to a particular class of emails. As an example, suppose we want to obtain the probability of the word ‘congrats’ belonging to the class of spam emails. We can compute this by first grouping all of the words in the input dataset that are marked as ‘spam’ and then counting the number of times the word ‘congrats’ appears in this group.

4)  When given a test email example, use the mathematical expression in Fig. 5 to compute the probability of the test email belonging to both the ‘spam’ email class and the ‘legitimate’ email class. Compare both probabilities obtained and then make your prediction.

Code for Training the Algorithm

SRE vs. DevOps: Yes, There is a Difference (And Yes, It Matters)