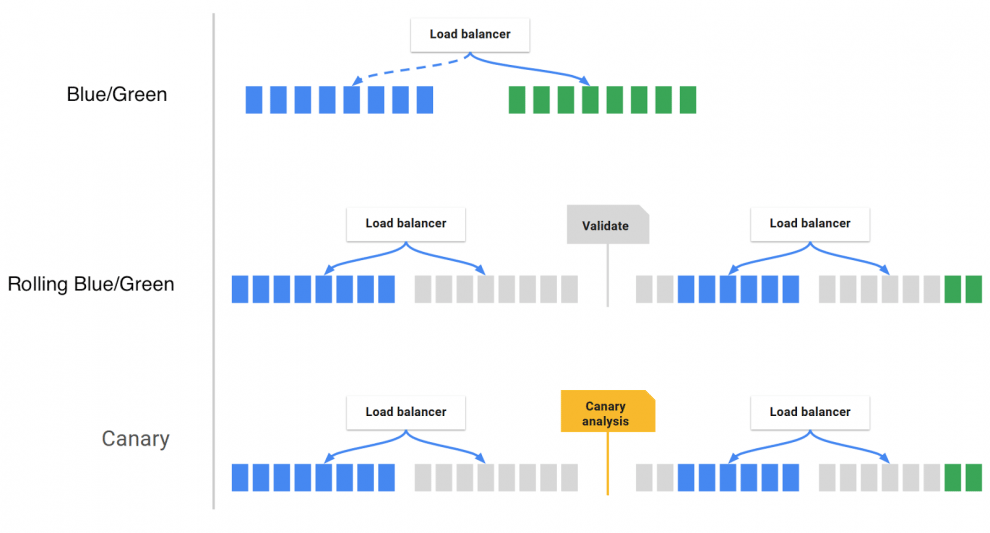 
In IT Infrastructure
continuous deployment

In a partnership with Google, Netflix introduced open-sourced Spinnaker (November of 2015), a multi-cloud continuous delivery platform for releasing software changes with “high velocity” and “confidence.” Spinnaker is designed with integration and extensibility in mind with tools such as Jenkins, along with support for AWS, GCP, Kubernetes, OpenStack, and Cloud Foundry. Additionally, this platform facilitates the creation of building blocks which compose the deployment pipeline. Spinnaker pipelines can be triggered by the completion of a Jenkins job or a cron expression. As shown below, the pipeline is composed of multiple stages. This post will briefly discuss the advantages of using this tool for your deployment and the microservices that form Spinnaker.

Spinnaker believes in deploying to the cloud using immutable infrastructure. There are two ways to change a server: mutable and immutable. Servers used to be maintained manually after initial creation. Manually maintaining servers has its drawbacks and can create “snowflake servers.” The main problem is that manual configuration leads to servers that are all configured slightly differently from one another, making the management and operation of them very difficult. Then there is the immutable option. New servers are created based on a “baked” image, which is generally automated. For any necessary modifications, this process will then be repeated. There are several advantages to this process. First, it prevents snowflake servers since each deployment is based on an image as opposed to manual configurations. Second, the infrastructure is versionable and can be easily replicated to a point in time for rollback/recovery.

Blue-green deployment reduces downtime risk by deploying to two identical production environments, called blue and green. At any time, 100% of the traffic directed to blue and green

exists on standby should green fail. The main drawback is that a company would need to double its resources to run this sort of operation. With the second option, rolling blue/green, deployment incrementally cuts over to the new stack—and with validation gates in between, you can run really robust smoke tests or functional probes. If something ever goes wrong, you can roll back immediately. 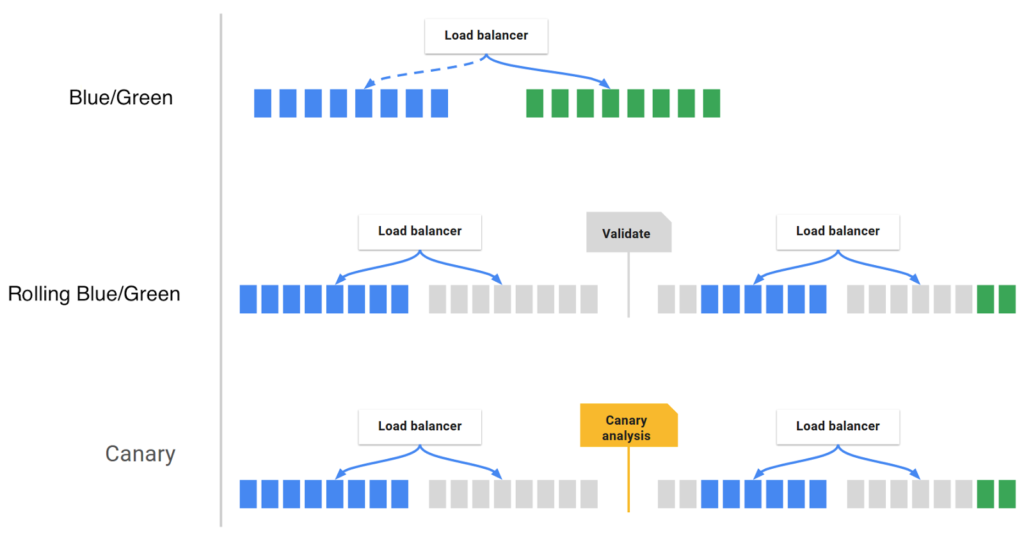 With the addition of automated canary analysis (ACA) in Spinnaker, canary analysis adds another layer of confidence to deployment. At Netflix, canary analysis used to be a manual process, where someone on the team would look at graphs and logs on the baseline and canary servers to see the metrics, error codes, response times/latency, exception, load average, and so forth. This becomes increasingly difficult with hundreds or thousands of servers. With Spinnaker, this process is automated and summarized within a report. With the ability to quickly look at metrics, you can safely deploy if the canary scores are met, or rollback when it fails. 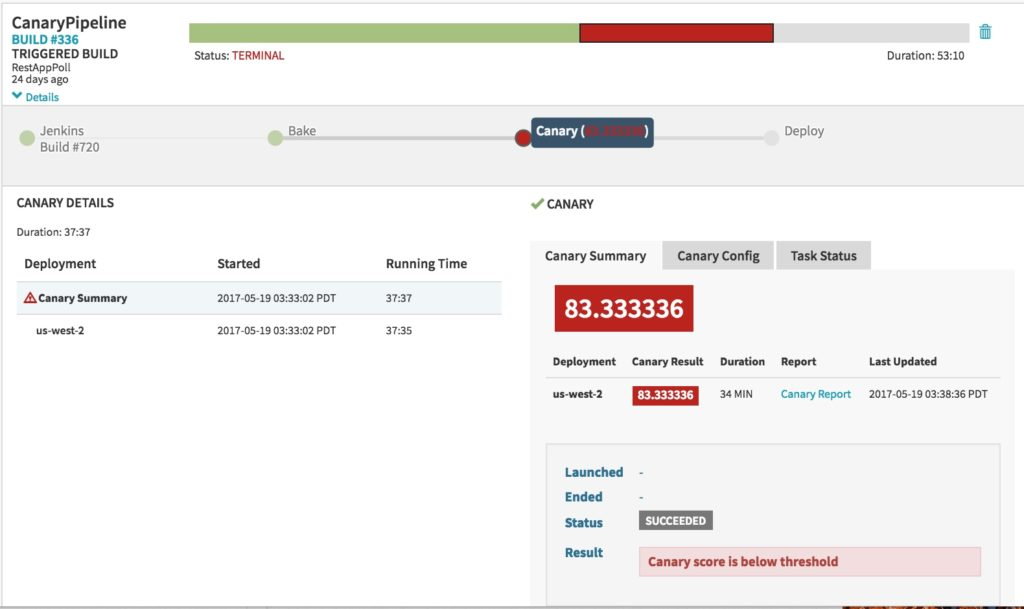 Other Measures to Reduce Risk Deployments

Spinnaker has many more ways to reduce risky deployments in addition to easy rollbacks and automated canary analysis. Netflix’s Tools Engineer, Tomas Lin, has highlighted some of the techniques and tools available in Spinnaker to ensure deployments are safe.

Spinnaker is composed of multiple open source microservices: Deck, Gate, CloudDriver, Orca, Rosco, front50, Igor, and Echo. It may be a good idea to somewhat familiarize yourself with what the microservices do when working with Spinnaker. In order for Spinnaker to run properly, you need to ensure that all the services are running. (There may be times when you have to debug and figure out why one of these services may not be working.)

The following is a simplistic overview of each service: 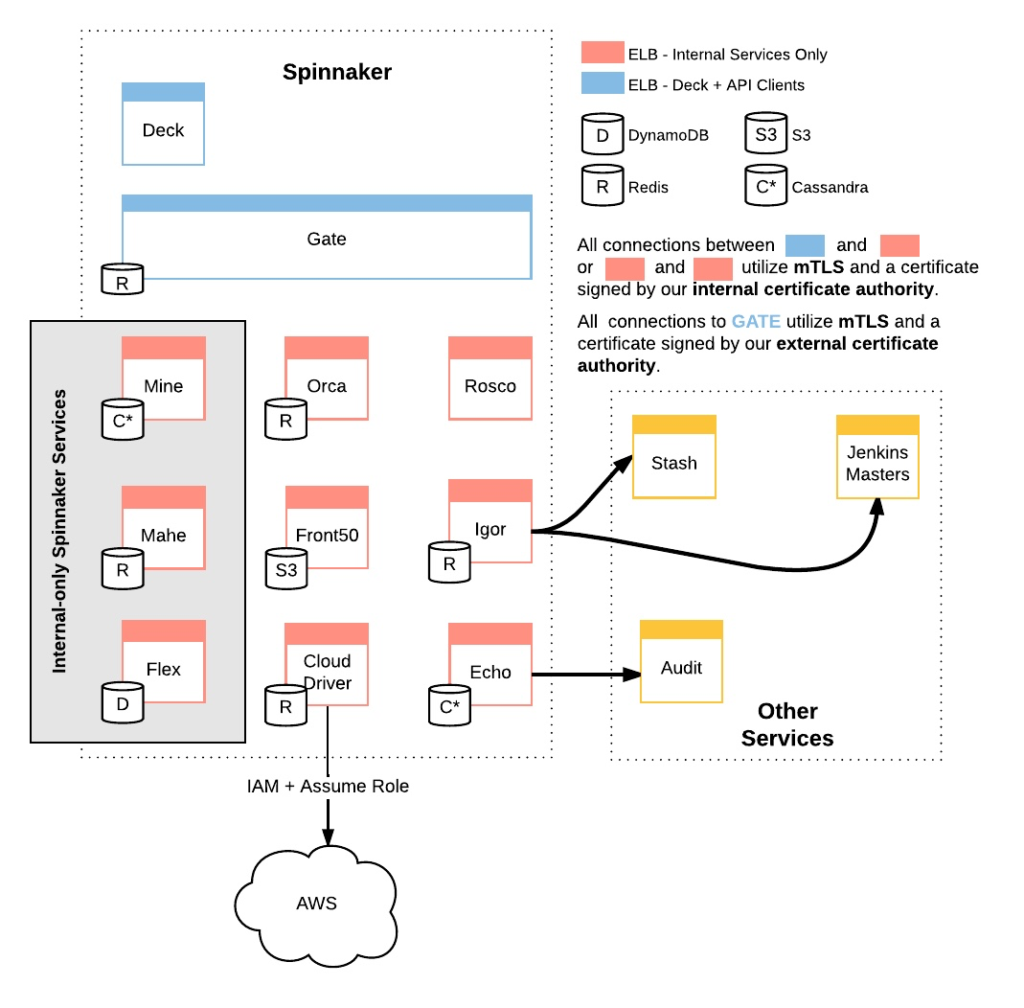 There are many advantages to using Spinnaker as mentioned above. Consider using this tool if you are deploying to different cloud providers. Spinnaker makes it easy to coordinate builds and deployment processes on multiple clouds with the same interface. Additionally, Spinnaker helps to standardize how pipelines are created, and the steps are very transparent in how code moves across environments. The primary drawback of the Spinnaker is that it is composed of multiple microservices, which can make managing the platform difficult. I advise using scripts available to monitor the health of these microservices. If you are using a single cloud provider, if may be simpler to manage using that provider’s deployment tool, such as CodeDeploy(AWS) Google Cloud Deployment Manager(GCP). If managing all the microservices is not a concern, I hope you give Spinnaker a try. Should you get stuck, Spinnaker has a very active community. Join the Slack channel and have fun!


Active-Active Environments in a Cloudy World