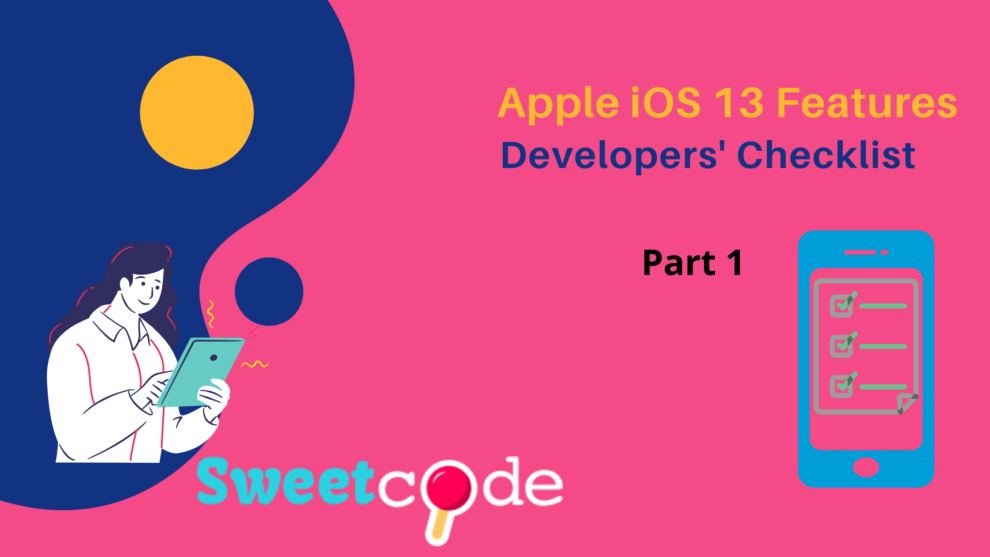 There is no lack of expert reviews highlighting the new features of iOS 13, the current version of Apple’s operating system for mobile devices. A quick web search will bring the entirety of these details to your fingertips. This app developers’ checklist of Apple iOS 13 features will add a bit of novelty to the subject by looking at this release from a different angle. In particular, this article will shed light on what has changed for app developers.

One of the obvious observations is that Apple is increasingly substituting third-party services with their own.

The whys and wherefores of these changes are two-pronged. First off, Apple is showing ambitions to dominate the environment of the most popular mobile services. Secondly, their software engineers are busy masterminding a transparent range of services tasked with extensive integration and interoperability.

What does this mean for you if you’re an app developer? If Apple hasn’t yet created a counterpart of your product, it’s in your best interest to ascertain that it delivers unique features that get along with the evolution of the operating system. Start with this developers checklist of Apple iOS 13 features.

Follow the user experience (UX) trends and adjust your efforts to the new dynamic reality.

macOS Mojave introduced Dark Mode in 2018. Users embraced it immediately. iPhone fans were looking forward to a similar feature around the same time, but it wasn’t deployed until the iOS 13 release. It can be enabled manually or scheduled to take effect automatically.

Most iOS users will probably opt for the default setting that turns on Dark Mode depending on the sunset time in their area. App developers, in their turn, have a lot of tedious work to ensure their applications fully support this great feature. It’s quite challenging to build user interfaces (UIs) with switchable colors and at the same time to make sure the design stays aligned with unique branding the users are familiar with.

The good news is, Apple provides a kit called Color Assets for Xcode projects that makes it easier for devs to manage colors and pick adaptive color values that match the UI style. Keep in mind that while this solution also works for iOS 11 and iOS 12, it doesn’t support apps tailored for earlier versions of the operating system.

Dashboards appear to occupy a very special niche in iOS 13. Apple’s applications are increasingly rendering various types of associated information on their home screens. This data often includes an event log, provides some tips about new features, and sheds light on different use cases. There is a contrast between this all-embracing tactic and the previously common approach with a clear focus on functionality.

The tweaks made to the Apple Maps home page demonstrate this shift. It incorporates new elements and hints to streamline the process of arranging places, adding favorites, or sharing the estimated time of arrival (ETA) with family and friends. The Health app presents real-time and daily statistics. These tools make users want to open the application again and again.

The inclusion of comprehensive infographics has become a major trend across Apple’s product lines. This holds true for smartphones, tablet devices, smartwatches, desktop computers, and laptops. So, if your application spawns some useful data when running, don’t fail to categorize and show it to the user via the dashboard. Before doing it, though, take your time and think what kind of info – fancy content or purely functional details – your audiences prefer to see.

iOS 13 has introduced some groundbreaking changes to the Photos app. There’s no denying that taking and editing photos are among the most-used features on an iPhone these days. Software engineers at Apple have taken this functionality to the next level.

The main screen of the app makes it amazingly intuitive to browse the gallery. It encourages you to keep scrolling through your pics for hours on end. The machine learning module helps you pick the best photos. iOS 13 has equipped graphics editing tools with unparalleled visualization. You can instantly see the results in the context of the other photos and videos. Switching between different modes such as gallery navigation, editing, and camera, has become extremely smooth.

Long story short, the iOS 13 Photos application undoubtedly outstrips its desktop counterpart. It has raised the bar for developers who need to work harder to make sure their products match this level of sophistication and deliver an equally seamless user experience.

Swift, a general-purpose programming language created by Apple, has reached new heights since the launch of iOS 13. The new user interface framework called SwiftUI is paving the way towards a reactive programming paradigm. It facilitates the collaboration between coders and designers, provides numerous UI models, and adds the Combine declarative framework to the mix.

These innovative programming tools are in beta testing, and the shift could be a bumpy road going forward. To its credit, Apple is doing a great job educating developers through detailed tutorials. With things like bug fixes and other adjustments being imminent, there’s no doubt that the company will be promptly tackling all hurdles to further endorse reactive programming. That being said, the reign of Objective-C is gradually weakening, so developers would be better off adapting to the new reality with more effective tools at its core. On the plus side, one of the hallmarks of SwiftUI is that programmers don’t have to be super-experienced to compile apps and add new functions to them.

Apple continues to create a comfortable working environment for developers. Third-party mobile app authors, in turn, have to stay abreast of the operating system evolution. Otherwise, they run the risk of lagging behind their more agile competitors. The release of iOS 14 is almost around the corner. It will definitely introduce more changes to keep up with. In such a dynamic world, flexibility and proactivity are just as important for developers as is programming expertise.

The second half of this series covers these new features: