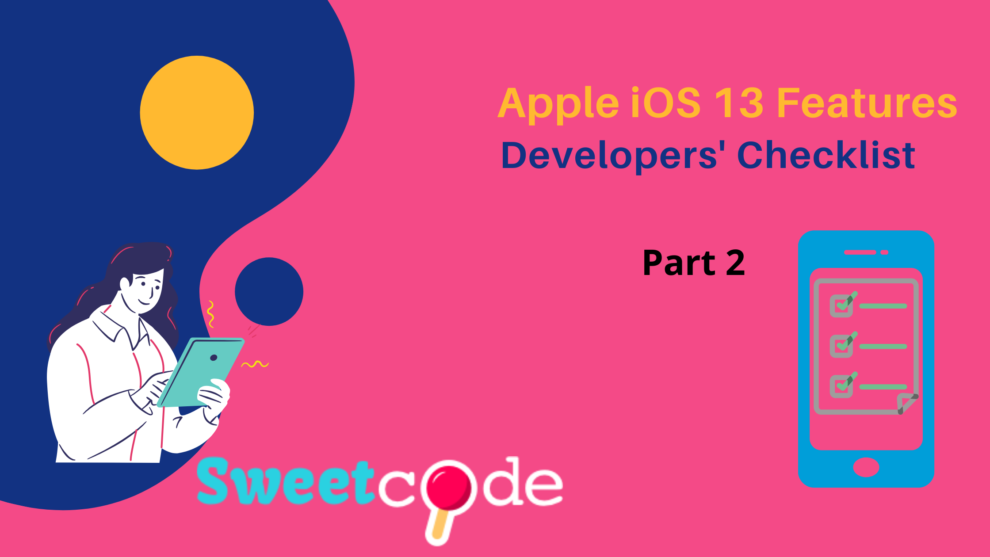 This is Part 2 of the app developers’ checklist of Apple iOS 13 features. You can find Part 1 of the checklist here, where you’ll see a list of third-party services that iOS 13 replaces.  This version of Apple’s operating system for mobile devices includes some features that change things for app developers. These two checklists include the highlights.

As an app developer, you will want to be aware of the iOS 13 features that may impact the user experience of those who use your apps.  The features highlighted in Checklist – Part 1 include:

The changes Apple is making advances their objective to be the leader in mobile services. To that end, their software engineers are focusing on integration and interoperability.

Of Interest to App Developers

The Launch of iPadOS

In September 2019, Apple made a somewhat unexpected move by releasing iPadOS – a separate platform for its line of tablet devices. One of the theories about the company’s motivation underlying this decision is that there was an unusually low demand for the recent iPad Pro models. These gadgets boasted outstanding hardware specifications but their built-in features were originally too scarce to unleash this processing potential.

At that point, there were few apps or use cases that could fill the void. iPadOS is meant to become a game changer in this context by providing enhanced functionality that measures up to the potent hardware under the hood.

In many ways, iPadOS is similar to macOS. It allows users to connect an external mouse and trackpad while delivering desktop-style scrolling experience. The SpringBoard application got a number of conspicuous enhancements, making the home screen more customizable and supporting a greater number of widgets.

These tweaks have encouraged app developers to come up with widgets that the users may want to add to their home screen. For example, it could make sense to create a widget that displays real-time data related to an app or includes shortcuts to trigger specific features without opening the app itself.

Interestingly, iPadOS beats its desktop counterpart in terms of multitasking. It allows users to open several windows of the same application and leverage the Slide Over functionality to bring up the Dock and easily open an app of choice.

This awesome feature set is a source for new scenarios developers should take into account. A good starting point is to think which apps can be displayed alongside theirs on the same screen so that the user experience remains at a proper level. Additionally, it’s worthwhile to determine whether the application is a sideshow or the main act in this combo.

A flexible app layout is another prerequisite for conformity with iPadOS architecture. With the overarching focus on multitasking, your product has to operate flawlessly regardless of the size and proportion of its window. This kind of design isn’t a new thing in mobile app development, but it’s not until the emergence of iPadOS that it became a “must” rather than an “option.”

Safari underwent several significant adjustments, too. The obvious one is that it has switched to displaying desktop versions of websites instead of mobile ones. However, a change that probably eclipses this shift is that the browser now supports full-blown web applications, including G Suite and WordPress. That’s some good news for proprietors of classic web apps. They no longer have to create a separate product for iPad from scratch.

Sidecar is another new feature that makes a difference. Introduced in iPadOS 13, it mirrors the Mac desktop to the iPad display. The compatibility side of the matter is that the computer must run macOS Catalina 10.15. In addition to screencasting, Sidecar makes it possible to use Apple Pencil in Mac applications. This poses one more advantage to coders. They can make the most of the existing iPad feature without developing a separate app.

The mantra about iOS and macOS being extremely secure, privacy-centric, and leak-resistant has been one of the core components of Apple’s marketing for quite some time. In recent years, these claims have been at odds with large-scale malware campaigns recurrently exploding in this environment.

Apple took steps to strengthen privacy protection. They complemented the Location Alert feature with details about background apps asking for access to location data. Whereas some services need this information to work right, many apps amass it on the off chance that it might be used down the line.

Since the release of the Apple iOS 13, this quirk can make your app’s reputation go down the drain. Once a user is alerted to its recent geolocation tracking activity, they will probably block it for good. Collecting superfluous data about users is now a more slippery slope for developers than it used to be. Therefore, if your product is logging such information, make sure it clearly explains the whys and wherefores of this necessity.

Most people are familiar with suggestions to log into online services using their Google or Facebook credentials. iOS 13 additionally allows users to benefit from the Sign in with Apple feature, which makes it easy to authenticate with websites and applications using Apple ID. You can leverage Face ID or Touch ID to add an extra layer of security to this routine. Developers generally welcome this initiative as it provides an authentication framework entirely controlled and safeguarded by Apple, and therefore there is no need to store and manage passwords on the app side.

Interoperability between iOS and macOS apps

The margin between iOS, macOS, and iPadOS is becoming slimmer over time. As a result, mobile apps can be seamlessly executed in the macOS environment. Last year’s Apple Worldwide Developers Conference (WWDC) became a milestone in this regard. They announced the capability to compile mobile applications on a Mac without using a simulator.

It’s worth emphasizing that iPad app design shares more characteristics with the macOS style than iPhone layout does. So the blurring delineation mostly applies to the use of iPad apps on Apple computers. Furthermore, since Apple is trying to implement coherent product designs across its operating systems, as is the case with apps like Stocks and Reminders, it is expecting that developers will be building their tools around this consistency logic as well.

This explains why some models of mobile devices are compatible with an external mouse and trackpad. UI elements, including the app icon design, are increasingly subject to cross-platform unification.

It’s no secret, nor is it a surprise – Apple continues to innovate. The release of iOS 14 will be here practically before the ink is dry on this post. Third-party mobile app authors must remain agile to stay competitive. Continue to develop your expertise. Stay connected with your developer community. Support each other’s efforts to stay up on the most current advances.