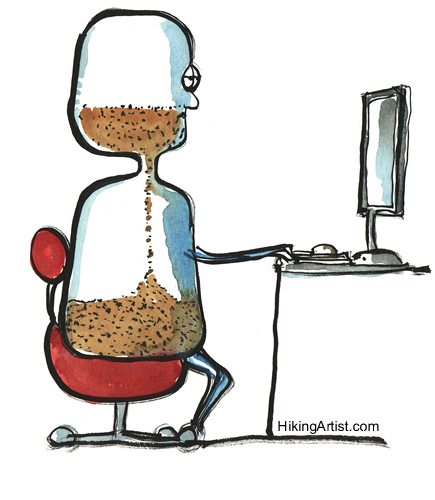 How Developers Really Spend Their Time

Developers today can have many different roles and titles. These roles and titles can vary from company to company, and that’s not even taking into account what kind of developer they are, or what they’re building. How developers really spend their time is a little vague. If you tell a non-tech person you’re a developer, thanks to many great movie depictions, they would think this is you at work:

Unfortunately, this isn’t just what non-tech people think. There are tech people who aren’t developers who assume that if you are a developer, you are sitting down at your desk everyday and just coding for eight hours a day. This thought can be intimidating to a new or aspiring developer, while also contributing to imposter syndrome. This mentality for developers isn’t only wrong—It can also scare away potential new developers. So how do developers really spend their time? 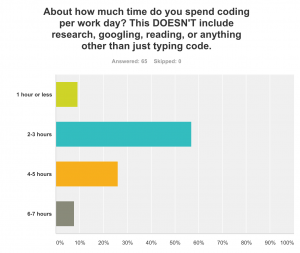 To find out how developers spend their time, I conducted a study of my internal network. This was a simple survey with 65 developers. The breakdown: 46% are currently junior, or student, developers; 20% are mid-level, and 34% are senior developers.

Then I asked how long they spent per day solely coding.

Next, I wanted to ask how long their average day was. That way I could see how much of their total workday was spent coding. Sixty percent of people said their workday was the average 7-8 hours. Surprisingly, 40% answered with 9 hours or more.

That means that developers only spend about 25% of their workday coding.

The main point of my survey was to prove that developers spend their time doing other things besides coding. What my survey didn’t find out was what those “other things” are. To find out what else takes up a developer’s day, I had to find a few resources.

I found a survey completed by the software delivery company Electric Cloud that interviewed 443 software developers. In this survey, they divided a developer’s tasks into the following sections:

The non-design and non-coding tasks took up, in total, about 22.4 hours per week, with their average week being 41.5 hours long. Over half of their week was spent not coding or designing. If you’re a developer, this isn’t surprising. If you’re not a developer, it could be pretty surprising until you think about it applied in other careers. A surgeon doesn’t spend all day in surgery. A photographer doesn’t spend all day just taking photos, and an accountant doesn’t spend all day just doing spreadsheets. In each of these professions, there may be days where people do stay in surgery, take photos or do spreadsheets all day, but there are administrative and miscellaneous tasks in every profession.

Being a developer isn’t the same every day

The question “What do developers do all day?” is something people ask on websites like Quora quite a bit. And scrolling through the answers, you will frequently see: “It varies, a lot.” There are some days where developers are rushing to meet deadlines, so they are coding for seven hours at a stretch. Or there are days where there are back-to-back meetings, and little coding gets done. Something that all developers of any title in any company can agree on is that their jobs vary day-to-day. There is no “average” day for a software developer.


Samantha has a background in visual and UX design, and is currently studying software engineering at Holberton School. In her (very little) free time she enjoys photography, writing, hiking, learning new things, and making all things pretty. Follow her on twitter @SamScislowicz

Protecting your Virtual Machines with Fail2ban