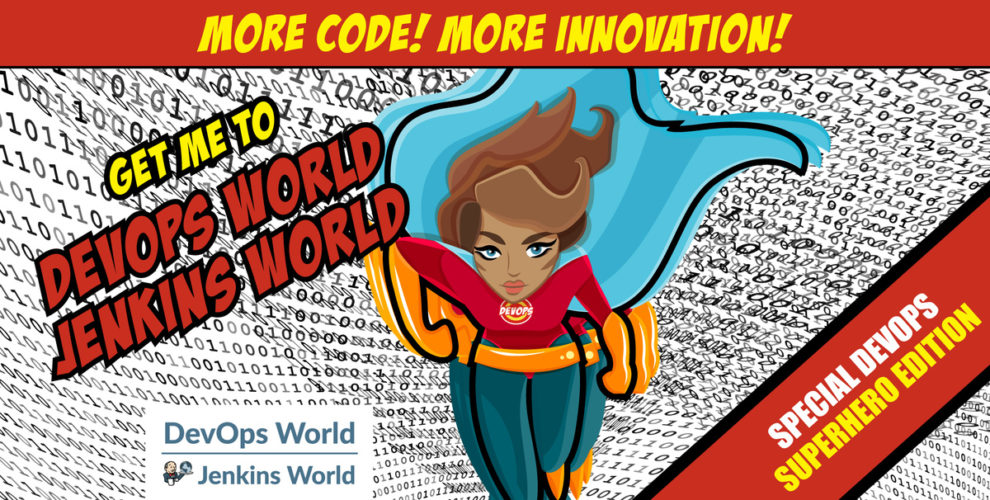 How DevOps Can Turn You into a Superhero

If you’re a Marvel movie fan – really, who isn’t? – then you probably think a lot about superheroes and superpowers. Maybe you’re a fan of how Thor can smash enemies to bits with his Uru-forged hammer. Or how Captain Marvel can absorb energy and fly like a condor.

In today’s IT environments, DevOps is the secret ingredient that unlocks the superhero in all of us. Doing DevOps correctly helps organizations transform their businesses to compete better in the marketplace. It gives them the power to solve super-complicated software delivery problems and produce super-high-quality applications.

That’s the general value of DevOps. On a more granular level, creating a well-defined, highly functioning DevOps practice gives an organization specific powers that it never had before. We’ll be talking about many of these powers at DevOps World | Jenkins World Aug. 12-15 in San Francisco. The conference has a “superhero” slant – with a themed after-party and sessions focusing on topics like “From Zero to DevOps Superhero: The Container Edition.”

Anybody who’s passionate about software delivery knows DevOps spins out more superpowers than Spider-Man does webs. Here are a few we’ll be covering at next week’s conference.

In the pre-DevOps world, the software release process was scattershot and inefficient. Builds would be “tossed over the wall” from one function to another – from development to quality assurance to testing to deployment – and no one had much visibility into the status of the overall project. Bugs would be discovered, deadlines would be missed, and the finger-pointing would start.

Creating a vibrant DevOps culture requires organizations to break down the silos and get teams working together. Dev and Ops need to be aligned. Assignments need to be coordinated. Teams can’t operate on their own; they need to be connected to each other, sharing members, sharing information and instituting transparent workflows that can be assessed and revised along the way. Silos block innovation. Cross-functional alignment leads to all-around excellence.

Deal with change and keep on innovating

It’s one thing to set a software delivery plan and execute on it. It’s quite another to deliver a flawless product when people are changing things on the fly.

In a DevOps environment, change is expected – encouraged even. Changes are treated more like challenges than impediments to progress. Developers get constant feedback from the business side, wanting to add a feature, tweak the look of an interface or change the font on a key piece of content. Developers themselves will fuss about the number of columns in a table or the smoothness of a navigation pathway.

Having a DevOps process in place, where change is baked in, gives the whole team license to innovate – quickly and continually. DevOps incorporates traditional change management techniques, giving people roles in the process, resources to implement change and the power to make decisions. But humans can’t be relied upon to do it all. DevOps embraces automation. If processes are integrated with existing tools, developers can request a change, set the machinery in motion and move on to other collaborative tasks that build value in other ways.

Set a schedule and stick to it

Nothing is more frustrating than constantly missing deadlines. In the pre-DevOps days, if any issues cropped up they would set the whole project back. Changes like the ones described above would trigger one of two potential outcomes: a delay in the project or a terse response from operations, saying “a deadline’s a deadline; next time, get your work in on time.” Neither outcome promotes innovation.

Today, DevOps practices not only provide a vehicle for organizations to innovate and improve; they enable teams to get changes into production quickly. If a change is missed during one round of production, teams can catch it for the next round – because the project is running all the time and being improved on a continual basis.

Let’s face it: Keeping employees happy is a top priority these days. Developers and other skilled software professionals are in high demand, and they command top dollar. They want to work for an organization that functions effectively and generates a high degree of job satisfaction.

Having a smooth-running DevOps operation removes stress from an otherwise challenging process and improves the quality of the end product. Software delivery pros want to deliver the best product they can; they’re proud of their work and they’re willing to do what it takes to get it right. They just need the tools and processes to ensure they’re reaching their potential.

What makes them happy? On a general scale, collaboration. DevOps workers want to work with the talented teams driving toward the same goal – not against them. Specifically, they want technologies at their fingertips that help them succeed. Having access to a tool like feature flagging gives them the ability to deploy new functionality quickly to a limited audience to get quick feedback. If the feature needs work, they’ll have a chance to get it right. If people like it, great.

Companies face challenges on a number of fronts these days – everything from getting products to market to improving quality to retaining top-performing employees. They need resources to do all they need to do. DevOps doesn’t solve every problem, but it does give them access to a bunch of superpowers they can use to fight the enemies that get in the way of progress.


CDNs vs. Load Balancers: Understanding Their Impact on Uptime and User Experience