The advent of Agile development means developers can deliver software products tailored to meet customer design specifications and requirements. In an Agile development environment, smaller groups in a team often work on different aspects of a larger project and commit regularly. The frequent addition of smaller chunks of code to the codebase through version control ensures that previous work is recoverable. However, this frequent addition of code to the codebase can break the existing codebase without proper communication and monitoring. To minimize this manual scrutiny and redundant communication, we need to invest in CI/CD processes. In  this article, we will walk through an end-to-end workflow of automating a CI/CD process for a Flask application via Travis CI and Heroku.

Continuous integration places much emphasis on automating test procedures to check that the application is not broken when new commit are made to the main branch. In CI, developers commits their changes back to the main branch as frequently as possible. For each commit, a build is created and the automated tests are run against it to validate it before it moves to the next stage in the CI/CD pipeline. This prevents the difficulties resulting from developers having to wait until the software release date to merge their changes.

With Agile development, software can be released at any time. If you can’t release new changes to your customers as quickly as possible, then it’s not Agile. Continuous delivery is responsible for ensuring that the software can be released at any time. A successful exit from the continuous integration stage moves the continuous delivery stage where a series of automated and manual tests from the QA team verifies that the product meets production requirements.

Continuous delivery ensures that every change to the main branch that passes all the stages of the production pipeline gets deployed to the production environment — except when a failed test occurs within the pipeline, in which case, a previous version of the software gets released instead.

What we are building

We are going to build a modern CI/CD pipeline for a simple Flask application for question-answering, a simple NLP project. And in this tutorial, we will go through all the processes involved in a modern CI/CD workflow (illustrated below):

In this tutorial, we’ll specifically do the following:

Start by creating a GitHub (or any version control) repository for our application. This step is necessary for any CI/CD, because Travis CI will directly retrieve and build our application from the GitHub repository. 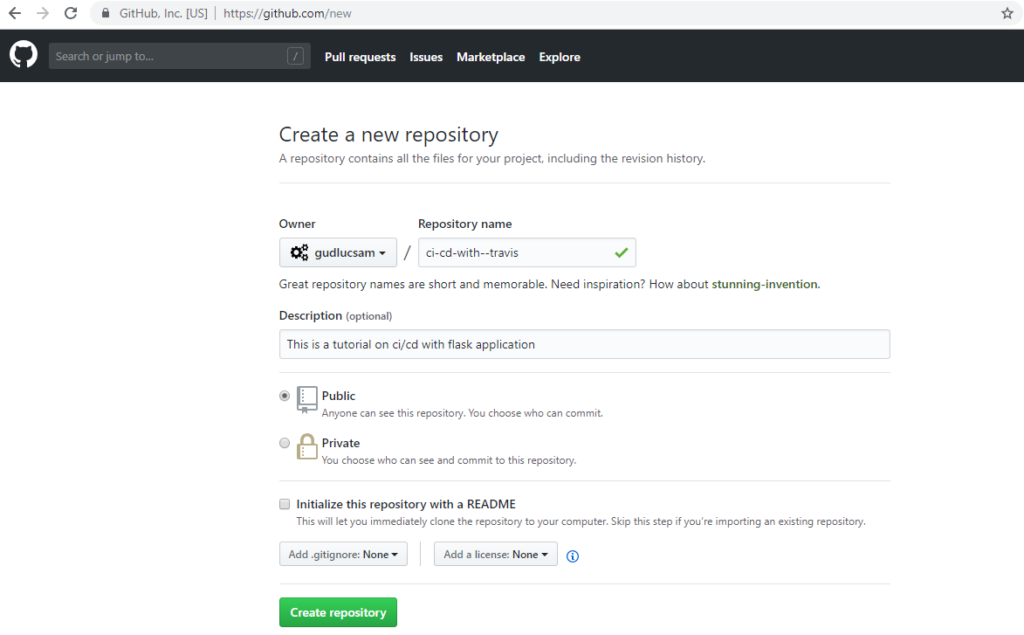 We will be building a simple NLP project for question-answering with a web interface using the Flask framework. Askme will take a question and magically output an answer — However, this is not the focus of the tutorial, so you can use your own application to follow along. 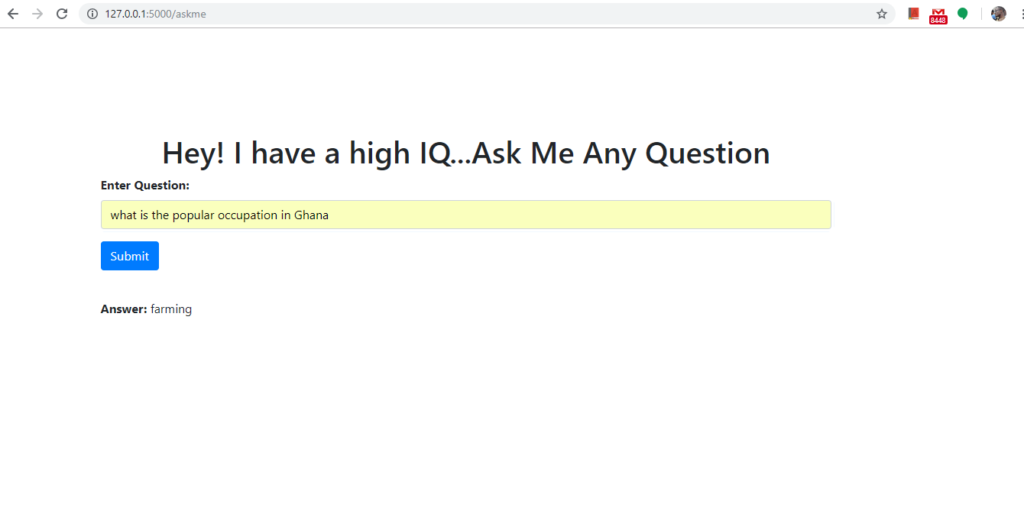 Interface of the askme Flask application

This is how the source code of our project currently looks from VS Code: 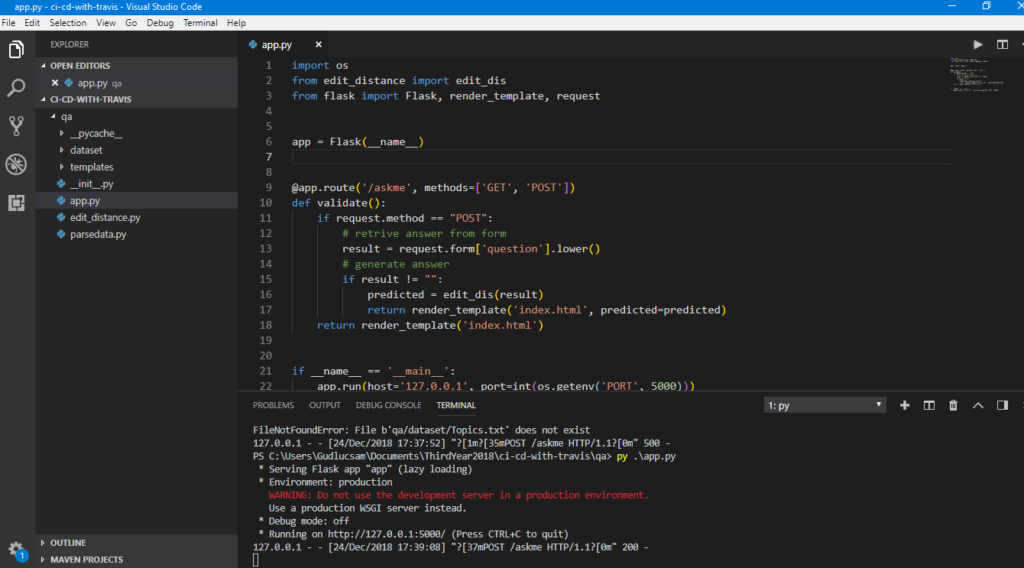 Source code of project from VS Code

Once you have your project working on your local server, push to GitHub. Now that we have a working version on GitHub, let’s add automated tests to our application.

We will write two tests for this application. The first test checks that the /askme endpoint returns a 200 status code. And the second test simply checks that the number of lines in the answers.txt file is 2609 (which is true). So far, your project folder directory should look something like this: 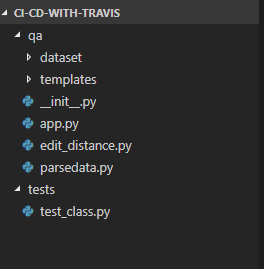 Next, run your tests locally, and make sure your code passes all test cases. To run the tests, install pytest and run the following command in your root project directory: python -m pytest -v tests/test_class.py. When your code passes all test cases, commit and push to GitHub. To check our code style with flake8, we will make Travis CI run that for us. We will skip integration tests for this tutorial, but it’s important to have these tests in your project. 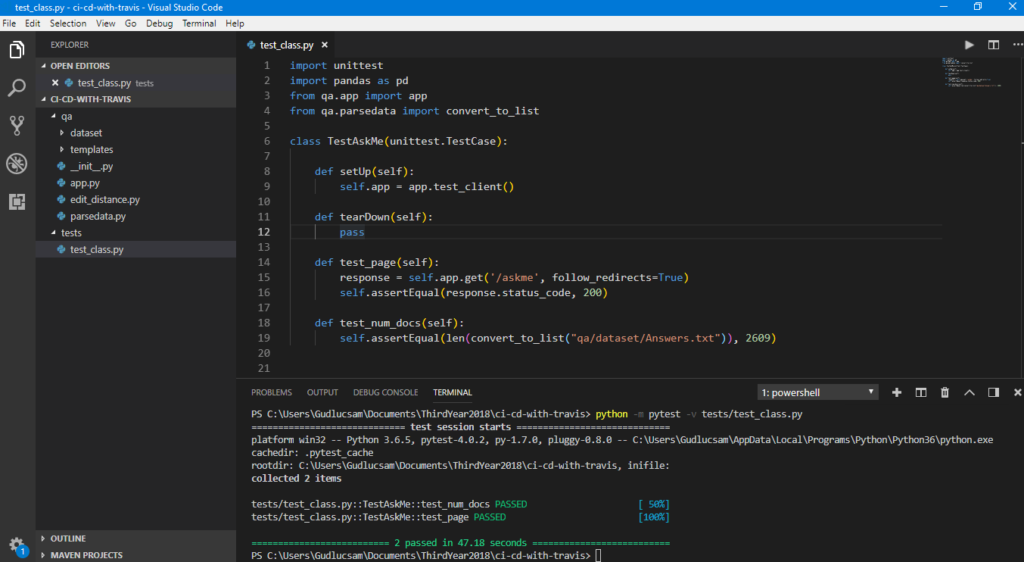 Travis CI offers continuous integration services, and is extremely easy to set up. Proceed to travis-ci.org, and sign in with your GitHub account. After signing in, you will find a list of all your public GitHub repositories. To enable Travis CI, track your repository, and build your project for each push, flip the switch next to your project repository:

Enable tracking for your GitHub repo on Travis CI

After activating Travis CI to track your project repository, add a .travis.yml file to the root of your project directory and add the following lines to it:

Additionally, create a requirements.txt file in the root of your project directory, and list all packages that are required to be installed before your project can run. List the following packages: 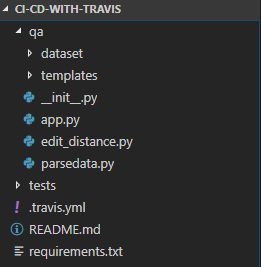 Commit all your changes and push to GitHub, and watch Travis CI take it up, build it and run all automated tests in your Travis CI dashboard.

Part of build for project on Travis CI dashboard

Docker is a software platform designed to make it easier to create, deploy, and run applications by using containers. It will contain all the parts needed for our application to run as a single package. The importance of this is that we can run our application on any environment without worrying about dependencies breaking our code.

To Dockerize our application, first download and install Docker and make sure that it is running on your computer. The command docker –version should output the version of Docker you are using in your terminal to indicate a successful installation.

Once you have docker running locally, add a file called Dockerfile to the root directory of your project, and add the following lines to it:

These lines will instruct Docker to pick the latest Ubuntu image, update its repository, install python-pip, python-dev, and build-essential and launch our Flask application when the container is ready.

These lines in the Dockerfile build the image locally. We need to deploy it to DockerHub after each build, to make it shareable on multiple environments, and we can automate the build and deployment to DockerHub from Travis CI.

To enable Travis CI to orchestrate this build and deployment to DockerHub, create a directory called .travis in your root directory and add a file called deploy_dockerhub.sh. Add the following lines to the created file:

Under the Settings view of your repository on Travis CI, set the environment variables used in the script as shown:

Finally, in your .travis.yml file, add the following lines to it:

Then, add the following lines to the beginning of your .travis.yml file:

Project directory structure and .travis.yml content from VS Code

Commit all your changes and push to GitHub, and once again watch Travis CI orchestrate this process on your behalf. Travis CI will build your project, run all your automated tests, install Docker, build the Docker image, launch the image when the container is ready, and deploy it to DockerHub. In the event of any failure, you will be notified through your email.

Now, let’s try to launch the built image of our Flask application on our local computer from our container at DockerHub. Run:

This output shows that everything from our pipeline is working perfectly so far. The next step is to make Travis CI deploy our Docker image from DockerHub to a live server in Heroku, so that we can access our application on the Web.

Heroku is a hosting platform for applications. It also offers a free service for lightweight applications, so we will host our project with Heroku. But we will first need to create an account at heroku.com.

Additionally, we will use the Heroku CLI from our local terminal to create our application, so download and install the Heroku Command Line tool from Heroku Dev Center. Make sure Heroku can be invoked via your computer’s terminal, and run the following to create the application:

Now, to allow Travis CI to pick up each successful build of our Docker image from DockerHub and deploy to Heroku, add a file called deploy_heroku.sh in our .travis directory, and add the following lines to it:

Set the environment variables in the Settings view of your repository in your Travis CI dashboard.

The Heroku app name is the name of application generated when you run the heroku create command from your terminal. And the Heroku API Key can be obtained under the account settings from your Heroku account. Finally, add the following line to your .travis.yml file under the after_success section:


Samuel is a software developer at an investment banking firm. He works on developing Rest services with Java, and frontend with the popular React framework.

Leveraging Thriftly to Manage and Monitor APIs in the Cloud


Moving from Monolith to Cloud-Native