Handling genetic sequences is an important aspect of fields such as synthetic biology and bioinformatics. However, dealing with long sequences of ACTGs can easily become difficult because these sequences tend to be extremely long.

Specialized software like SnapGene makes it easy to visualize and edit genetic sequences. SnapGene highlights the individual sequences within a genetic construct and provides tools that make it easy to edit these constructs.

How to add sequences to SnapGene

The first step in using SnapGene is to import a given genetic sequence or an existing construct. To do this, open SnapGene, click on new DNA file and paste your genetic sequence in the textbox in the window that pops up. (You can get some sample sequences online from UniProt or GenBank.) For this demonstration, we will be using a green fluorescent protein (GFP) extracted from Aequorea victoria (jellyfish). You can access this genetic sequence by following this link and clicking the Sequence tab on the web page. After pasting the sequence into the textbox, select linear under topology. We’re using this option to prevent any confusion because GFP is not in a plasmid.

After adding the sequence, a visual representation of the GFP will be shown in the SnapGene window. The green arrow at the bottom shows the location of the GFP within the given sequence. The direction of the arrow also shows the direction in which the gene should be transcribed to properly express the GFP protein. Finally, the restrictions sites within the genetic sequence are shown in black text above the two thick black lines. The two thick black lines simply represent the genetic sequence. This can be seen in the image below. 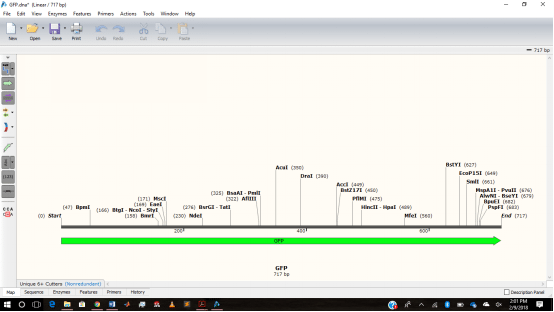 Apart from visualizing genetic sequences, another convenient feature of SnapGene gives you the ability to compare genetic sequences. This is useful for a number of reasons in identifying genes that may express similar proteins. To compare genetic sequences, first create a new file with the other genetic sequence, using the steps outlined previously. This post will use another GFP sequence that was obtained from a different source to check for any differences. This alternative GFP is a synthetic, yeast-enhanced GFP (yeGFP) obtained from Candida albicans. After creating a new SnapGene file with the yeGFP, save it and go to the window with the original GFP. Click on the alignment tool (which is the last tool on the left pane of the window) and navigate to the location where the yeGFP file you just created is located. Then open it. A new feature (brown arrow) should now be added to your window above the two black lines that represent your original GFP genetic sequence. The white spaces in the arrow show the parts of the yeGFP that differ from the GFP sequence. You can also click on align sequences and select align multiple sequences, then add the GFP sequence so you can compare it with itself. You will observe that the arrow representing the GFP will have no white spaces, indicating that they are the same. This is just a glimpse of the powerful visualization tools that SnapGene provides.

The Testing Buffet: Or, Why You Need Multiple Testing Framework Options


Gaining Productivity and Resilience with Kubernetes