Introduction to Blockchain and Proof of Stake with Tendermint

Over time, the technology behind Blockchain has evolved, and new consensus algorithms have been proposed to solve the issue of reaching agreement in a group of servers or nodes. One of those algorithms is the Proof of Stake where each next block is chosen via various combinations of random selection and weight factors instead of mining a hard and computationally expensive hash function. In this article, we are going to use Tendermint as the blockchain consensus engine and deploy an example application in a testnet.

First: What is a blockchain?

A blockchain, in layman’s terms, is a database that is distributed across multiple computers at the same time. In order to update this database, new sets of recordings, or “blocks,” are added to it. Each block consists of information like a timestamp and a link to the previous block. That’s why it’s called a blockchain. One particular characteristic of this database is that it’s not managed by any particular body; instead, everyone in the network gets a copy of the whole database. Old blocks are preserved forever and new blocks are added to the chain irreversibly, making it impossible to manipulate by faking documents, transactions and other information.

Tendermint is a byzantine-fault tolerant state machine replication or Blockchain technology. It’s a blockchain consensus engine and a generic application interface. It works with participant nodes called validators, which take turns proposing blocks of transactions and voting on them. New blocks are committed in a chain, with one block at each height. A block may fail to be committed — in which case the protocol moves to the next round, and a new validator gets to propose a block for that height.

To successfully commit a block, a series of voting stages are required to pass, and at least 2/3 of validators need to approve them. There are various reasons why the validators may fail to commit a block. For example, the current proposer may be offline, or the network may be slow. With various rules, Tendermint guarantees the terms are not violated, and it will never commit conflicting blocks at the same height. Below is an illustration of the consensus engine with the voting rounds (a.k.a. polka dance rounds). 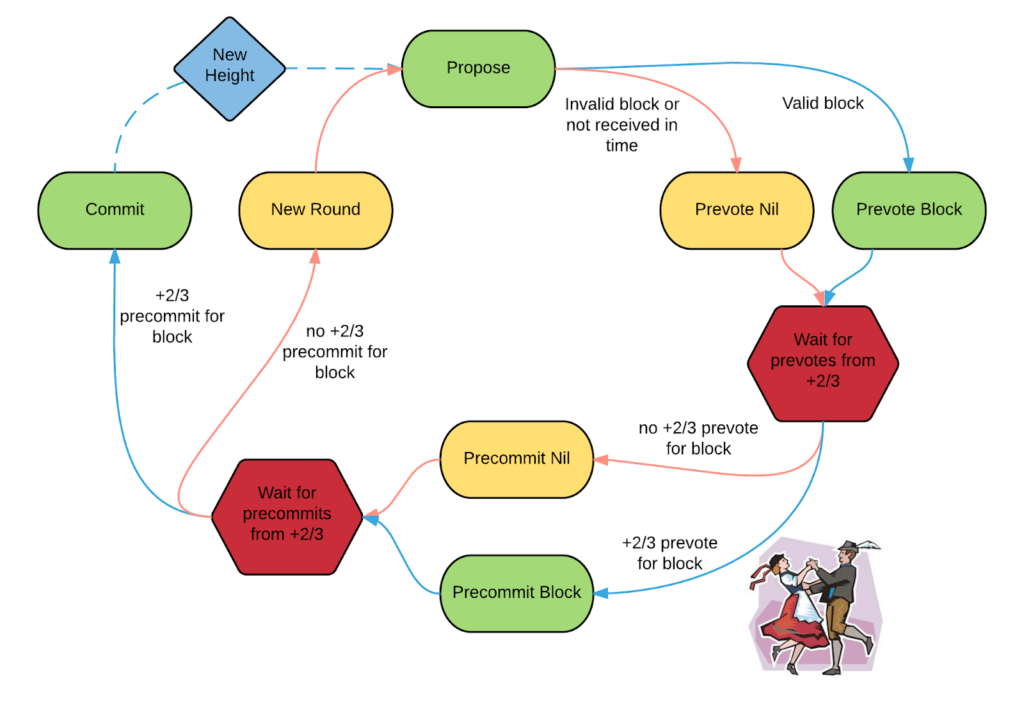 Deploying a Tendermint testnet and an example application

Let’s see how we can install and deploy a Tendermint node and test an example application.

Follow the instructions on how to install Tendermint from source:

Run the following command inside the build folder to initialize a test network.

This will create the following folder structure:

Next, we need to set up our node environment, and especially the TMHOME env variable. It’s best to assign it to the build folder so we can test inside the project:

We also need to update one config section to not allow empty blocks to be committed, as it would be easier to track the transactions in the console. In config.toml change the following option to false:

In order to run Tendermint core, we need an active ABCI application where we can test our blockchain. Luckily for us, there are some ready-made examples we can use.

Then, start the KVStore application that acts as a key-value database:

Now we are ready to initiate the consensus engine:

You will see some initialization logs, but after that, the engine is up and running. Let’s test with some transactions.

Submit a value to store:

(No spaces in the transaction payload)

Query a value from store:

The key and values are base64 encoded.

In this article, we’ve learned about Blockchain and the Tendermint Consensus engine. We have deployed an example blockchain application and tested how it behaves. The topic of Blockchain and consensus algorithms have created tons of new opportunities for decentralized computing and solving old problems with a new approach. Stay tuned for more exciting articles discussing those technologies.


The Evolution of Container Security, 2013-Today