In IT Infrastructure
splunk · tutorial · VictorOps

Git is a version control system widely used by organizations and millions of developers worldwide to securely and consistently manage their private codebases. In many cases, businesses adopt open-source projects for their infrastructure and library requirements. Given the convenience, it’s not an overstatement to say that we stand on the shoulders of giants.

In many cases though, depending on the open-source library, it’s not always enough. Oftentimes, the people who maintain those projects don’t have time to fix existing bugs or add new features right when we want them.

This process can cause friction in both the development and the incident management lifecycle. Eventually, we may find a bug in something that’s critical to our business and try to fix it locally by cloning the project and then adding the fixes, so we go ahead and add those missing features on top of a branch that we control.

This is the point where we could potentially end up introducing more problems – let’s dive into it.

The problem with keeping local and GitHub repositories in sync

The main problem we have when we clone an external open-source repository is that we have to maintain our own commit history when we add extra functionality. The commits we add are part of our separate history, so if the original repository ever merges different commits into the branch we’re using, then we’ll end up with a different lineage. So, there could be conflicts if we wanted to merge any updates or changes from the remote branch into our local branch.

To showcase what we mean, let’s simulate this problem by creating a repo and adding some changes:

1) Create a repo on GitHub using the UI – I named mine sync-example.

3) Add a README.md file and add some text:

4) Once the remote repo is in sync in GitHub, go to the Project page and modify the README.md in place using the UI, and then click the Commit Changes button.

5) Now go back to the README.md locally and add a different modification to the same file, then try to push to master:

Typically, the remote branch would be an external repo which we don’t own, so we wouldn’t be able to push to that repo. The external repo can be updated at any time. In our local repo, we want to have a set of changes (bug fixes or features) that are not yet available in the remote repo. Thus, our local git history would be like this:

But the remote history would be:

I’ve highlighted the hashes of the two commits that are currently in conflict with each other. Git won’t merge those two because they’re unrelated, so we have to instruct git to do something else. (P.s. You can learn more about tracking service ownership with Git here.)

Let’s now take a peek at how we can solve those out of sync problems in the best way possible.

The solution(s) to out of sync GitHub and local repos

Let’s see how we can overcome those issues and keep all of our eggs in the basket. We have a few options, each with its own pros and cons. Let’s start with the less favourable one:

Technique 1: Manually updating the new commits on top of the latest changes:

When the remote repo gets ahead of other bug fixes that we need to include in our local repo, we need to create a patch file and save our commits in it. For example:

1) Create a patch with our latest changes:

2) Delete our repo and clone the remote repo again:

3) Check if we can apply the patch with our changes:

4) Uh oh! We cannot apply the patch automatically since there are conflicts. Let’s use the –reject flag to let GitHub apply only the parts that have no conflicts:

5) Finally, inspect the README.md.rej file and apply the other changes manually:

As you can imagine, performing all of those steps every time we need to sync with the remote branch would be very cumbersome and prone to errors. Luckily for us, we can do it more quickly and with more guidance using the rebase command. Let’s follow the steps again:

1) Reset our current branch to our previous changes:

2) Rebase the remote branch into our local branch:

Resolve all conflicts manually, mark them as resolved with
“git add/rm

Eventually, rebasing does the same thing as before, but now it gives us a more streamlined approach and a better UI. We also could have used cherry-picking if we wanted to apply a specific commit in our history:

Rebasing is suitable if we have two or more commits to apply on top of the remote branch and we want to keep the history in that order. 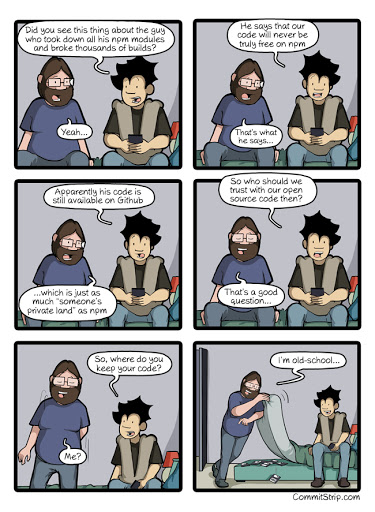 Having to maintain a local Git repository in sync with a public open-source project is not ideal, since it substantially increases the technical debt of our codebase. In some cases where we have to offer extra functionality not provided by the original library, we have a few options that we can implement, as we described in this tutorial.

However, it doesn’t have to be that way – we can always contribute to the community by fixing bugs and adding those features that we implemented in our repository. Ultimately, actively participating in popular open-source projects will not only give us more credibility and respect in the community, but also a chance to share our values with the world.