Linux: Why You Should Consider Switching


In IT Infrastructure
linux

A couple of years ago, I decided to try out Linux, just out of curiosity. I had no intentions of making a switch; Windows had been my primary OS for as long as I could remember. (And my only encounter with the Apple “family” was owning two legendary iMac G3s at some point.) But which Linux distro would I choose? After days of research, I settled on Mint, as it held the number one spot on DistroWatch (it still holds it), and its interface looked simple. After a using it for a few hours, I took a leap of faith and did a clean Linux install. Further down the process, I stalled the installation to research the right file system and what exactly /, /boot, and /home meant before continuing. I have used Mint since, and the experience has been nothing short of spectacular. Here are five reasons you should switch to Linux.

From considering using Linux to actually installing the OS, you’ll be gifted with several options to choose from: Ubuntu, Arch, Debian, Kubuntu, Fedora, DragonFly, Chakra, Slackware, Tails (remember Edward Snowden?), Devuan, Remix OS (Android on PC), openSUSE, Manjaro, CentOS, 4MLinux, Zenwalk …You get it. This list could go on and on. Only time will tell when it will end. There’s a Linux distro for every domain, or you could build one if it doesn’t exist by following guides on LFS. Some distros offer free download with commercial support for a fee. Proxmox VE and Rockstor are two of these, giving enterprises and individuals the ability to run containers and virtual appliances, and providing support for private cloud storage, respectively. Another plus is that most Linux distros have relatively small installation media sizes, with many below 3GB.

Many file systems to choose from

When installing Linux, you can easily be overwhelmed by the number of supported file systems, which is something Windows and Mac users hardly worry about. Supported file systems range from Microsoft’s NTFS to Apple’s HFS+ and beyond. For a casual user, you’d be OK just sticking with Ext4 unless you know what you’re doing, or you’re up for some experimentation. I use Ext4 for both my root(/) and boot(/boot) partitions, as they boot faster on my laptop. I use Btrfs for my home(/home) because of its offline and online shrinking feature. There’s just so much freedom of choice. Support for multiple file systems makes Linux a reliable recovery OS. In case you mess up your OS partition, you can easily recover personal data with any live Linux media. The image below shows some of the supported file systems and supported operations. 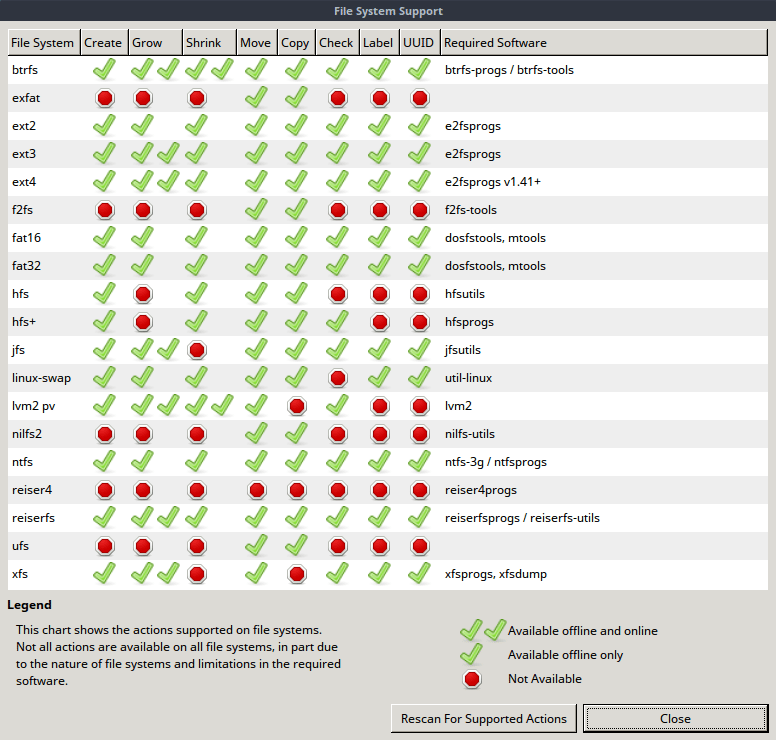 A distinguishing feature of many Linux distros is support for live USB and live CD booting. With Linux available in many flavors, live USB/CD booting allows users to try out a distro, installing it only when the user chooses to. This feature gives a better view of how hardware responds to a distro when installed compared to running the distro in a virtual machine. A distro like Tails thrives on this feature in protecting user privacy, and offering great anonymity. It is the same OS that whistleblower Edward Snowden used in the NSA leaks.

It is often a clever idea to mount “key” folders on separate partitions. I have benefitted enormously from this, retaining all my personal data when I ran into a boot problem. With /home, /, and /boot folders in separate partitions, personal data can be retained in case of a crash, upgrade, or change of distro. The /usr subdirectory stores programs; /bin, command binaries; /var, data that changes frequently when the OS is running; /tmp holds temporary files; /lib, shared libraries; and /boot contains boot loader files. There are many other directories. The Linux FileSystem Hierarchy contains detailed info on all the various directories.

Linux is like LEGO. It can easily be modeled to suit a user’s needs. If you don’t like the desktop environment, you can always switch to another. I use Cinnamon on Mint with MATE installed alongside so I can leverage its “resource friendliness” during heavy use. If you are a command line junkie, you can ignore the GUI altogether and still have a satisfying experience. If you don’t like a program, just executing sudo apt remove <whatever-you-don’t-like> will do the trick. If you hate a program, sudo apt remove –purge <the-hated-program> will surely make you happier. In short, you can make your Linux distro into almost anything you want by following instructions from the infinite forums on the Internet—or do it yourself, if you trust your programming skills enough.

There are many more things that make Linux intriguing. It’s no wonder 498 out of the top 500 supercomputers use Linux. I hope the few features mentioned here have piqued your interest enough to make a switch or at least try it out.


The Future of Computing is on the Edge