Node.js is a cross-platform JavaScript runtime environment for executing Javascript outside the browser. You can use Node.js to build an Application Programming Interface for communicating with the server side. Node.js makes it possible to build a full application using one programming language, Javascript, for frontend and backend. The uniqueness of Node.js lies in its ability to run in a single thread process, and can handle multiple concurrent processes. Highly-scalable and real-time apps such as Netflix, Paypal, and Trello were built with Node.js. I am so excited about the new features added in the Assertion module in Node.js. Let’s explore the elegant ways of tracking function calls introduced in Node v14.2.0.

Node v14.2.0 came with three exciting features: assert.CallTracker , assert.verify and assert.report. The purpose of these methods is to enable tracking a function. It is important to note that these methods are experimental; they are not yet recommended for production purposes.

What is Assertion in Node.js?

Assertion is a way of evaluating programming expressions. Node.js has a useful module called assertion that contains various assertion functions. The assert module is mostly used for unit testing in Node.js. Assertions are crucial components in programming because they help us to evaluate the correctness of a piece of code, which is an essential attribute of any high-quality software.

To understand this tutorial, you will need:

How to Use the Assertion Module

Our starting point for tracking a function is importing the assertion testing module:

What is the Purpose of assert.CallTracker?

Below, you’ll see how to instantiate a CallTracker object:

If you run your code at this point, you are likely to encounter a TypeError as shown below:

This is because in the previous versions of Node, assert.CallTracker had not been introduced as a constructor. To proceed with this tutorial, you will have to install Node v14.2.0. Let’s add a few lines of code to what we have as shown below:

After that, we can call our wrapped func using the callsfunc so that it is traceable. One last thing to do is to verify if the tracker call (callsfunc) has been called twice, as expected, using tracker.verify().

In the code below, we are interested in tracking the number of times callsfunc function was executed, and match it against the number of executions we set; in this case, two calls. See below for a sample output: 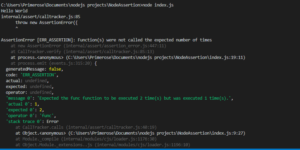 We got an error after printing “Hello Word” once. This is as a result of calling callsfunc() once, instead of twice as defined. Any time the output value of the callsfunc() does not add up to the number of times it’s expected to be called, tracker.report() is implicitly called.

Tracker report is a JSON array containing detailed information about the error that occurred when tracking a function.

Below is the structure of a tracker report:

The Structure of the Tracker Report

There are five main components of tracker.report()and they include:

The Expected Number of Executions are Equivalent to the Actual Executions

Here is the output:

From the output above, we can see that “Hello world” was printed twice because we called callsfunc() twice. The empty array shown in the output represents the tracker report I explicitly printed. The function was executed the number of times it was expected to be executed. Therefore, no tracker report message is generated.

Let’s recap the main things we discussed in this tutorial:


Primrose Katena is a software engineer, entrepreneur and technical writer. She strongly believes entrepreneurship and technology are positively impacting the world. She has worked in the IT industry in Zimbabwe and Entrepreneurship in Ghana. Ms. Katena loves sharing tech knowledge with other developers through writing.

Why AIOps, and Why Now?