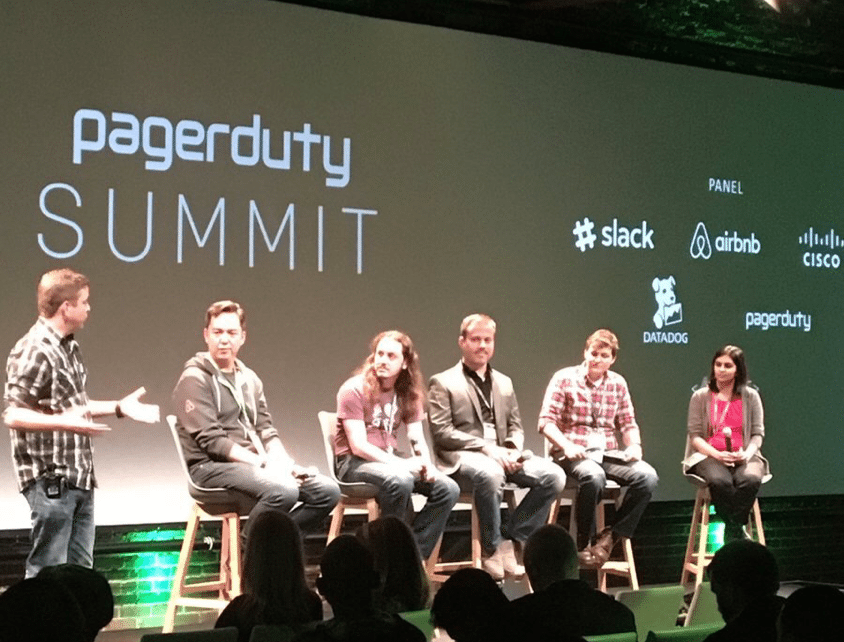 Empathy, Bots, Automation and Fail Better. That’s it! That is all you need to build a DevOps environment. And the reason I know? Because that’s what a crowd of uber techies told me at the first-ever PagerDuty Summit. PagerDuty put on a great event this year, and they brought in all-stars.

Disclaimer: PagerDuty is a customer of Fixate IO. They help fund my video game purchases (Fallout 4), but my opinion about their event is separate.

The summit turned out to be an opportunity for me to confirm something interesting. While each DevOps stack looks different in the tools they use, what drives them is pretty much the same.

This year the PagerDuty summit was held in downtown San Francisco. It was a decent-sized event with approximately 1,000 registrations. The setup was awesome, with a handful of interesting sponsors such as DataDog, and Evident IO. Normally you expect a vendor event to be heavily slanted. But they made a point of being present in decor, and not in content. They pulled this off by bringing in great speakers such as Gene Kim, and Andrew Fong, Director of Engineering at DropBox, Kris Merrill, Engineering Manager at Slack, Ben Del Vento Sr., Solutions Architect at Cisco, and Joey Parsons, Engineering Manager at Airbnb.

Because I’ve recently re-discovered hermitism, after I arrived, I did a brief round of networking with anyone who made eye contact, and then went straight to the speakers lounge. It was there that my mind was blown with technologies, and a consistent theme started to emerge. Talent acquisition is hard, and culture is no joke.

It was one of the most technical speaker lounges I’ve ever been in, despite the fact that they were talking about design patterns (which made my head spin). They were also real about the business side of application development.

At this point people get the value of DevOps (or if you prefer, the modern delivery chain). But what they may not know, and are frustrated by, is where to start. Ok culture, so how do I do that? You can’t just do it.

The long-tail effort of building a DevOps environment is made up of those things that are hard to establish and measure. But with the right hires and buy-in, you can do it. Which means top-down understanding is key. But if you are in middle management, you likely have no say. So, the best way to join a modern environment, in some cases, is to quit your job.

Companies will be pushed in the direction of modern development. At this point, they simply have to keep up. Ben Del Vento at Cisco is dealing with legacy businesses all day long who are modernizing. The case studies are there. And you have the GSA, which puts a lot of commercial companies to shame.

To finish the day out, I was privileged to host a panel with Kris Merrill and the other fine people I mentioned earlier, plus Sweta Ackerman, Engineering Manager at PagerDuty, and Ilan Rabinovitch, Technology Evangelist at DataDog. All the same themes I’ve touched upon here presented themselves in the panel. We also talked about how you measure success. There was no one clear metric, but if you are result-focused, then supporting business goals and happy customers are the ultimate.

Here are some other big takeaways for me:

I did not get the where and when of the next PagerDuty summit. But I will be there. I hope it maintains its focus on providing real value and won’t slant towards a tool-only conference.

3 Pros and 3 Cons of Working with Docker Containers


What Are All These Container Platforms, and What Do They Do?