For most beginning and intermediate programmers, working with multiple directories in Python projects can be frustrating at times. As a Python programmer, it is a best practice to abstract application code into different files and directories and according to their related functionality and data requirements. Moreover, you will have no option but to use existing packages and modules others have written. This will require the ability to work efficiently within multiple directory packages in your project.

Importance of working with multi-level directories in your project code

However, working with multiple levels of directories in a project can be daunting for programmers starting out and using third-party packages or modules in their own programs. In this article, I provide a simple way to easily handle file importation in multi-level directory project code. (To see how Python projects should be structured, refer to the Python document at the end of this post.)

Importing a file in a multi-level directory structure

In Python syntax, a leading dot indicates the current directory. Each additional dot moves you higher up a directory or package. It is generally advised to use absolute import rather than relative import in your code.

Let’s use a Python project with a directory structure (as shown below) to demonstrate how easy it can be to import from a multi-level directory using both absolute and relative import. 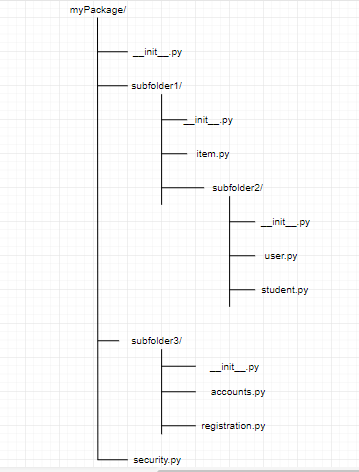 Note: In Python, each directory or subdirectory must be initialized with an __init__.py file for it to be recognized as a package or subpackage. Otherwise, you may get a no-module-found error when trying to import.

However, for a file one level deeper, when in the __init__.py of myPackage and importing the item.py file in subfolder1:

For a file two levels deeper, when in the __init__.py of myPackage and importing user.py from subfolder2:

The most daunting aspect is having to import a file backward—that is, from a higher level into a file in a lower-level directory. Absolute import makes this easier.

To access user.py from student.py in the same subfolder2, simply:

Abstracting your code into subpackages or modules will help you write easily maintainable code. I hope this helps reduce headaches when working in a multi-level directory package or module.


Samuel is a software developer at an investment banking firm. He works on developing Rest services with Java, and frontend with the popular React framework.