The Random Forest Algorithm is able to predict the class of a given observation through the implementation and use of a ‘Random Forest’. ‘Random Forest’ is a term to describe several ‘decision trees’ that are working together to produce a collective output.

A decision tree is a tree data structure that determines the distinct classes of data within some given data sample.

Consider the following example that further explains the concept of a decision tree: 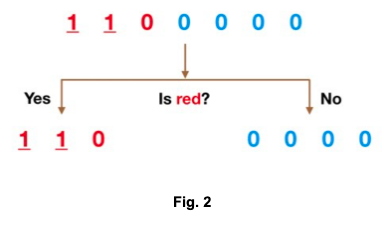 Although the data is split into two categories, certain features in the left child node differ. Some of the characters are underlined and others are not underlined. 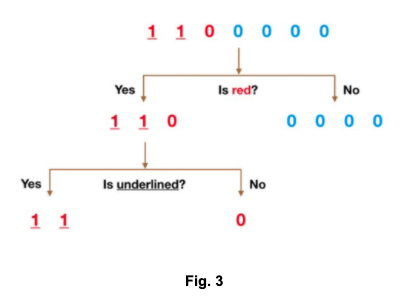 In the formulation of decision trees, we always ask the following questions at any given node in the tree:

1)  Split the data into groups which are as distinct as possible.

2)  Split the data into groups such that the data that are within the resulting groups are as similar to each other as possible.

Below in Fig.4 is an image showcasing how the Random Forest Classifier works: 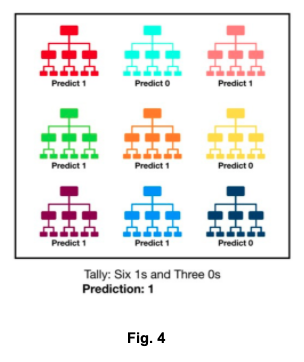 Prerequisites for the Random Forest Classifier to perform well

To enable a Random Forest Classifier to perform at high levels of accuracy, two main prerequisites should be satisfied. They are:

1)  The features of the dataset that are selected to be used to discriminate between the data values should be good enough.

2)  The predictions (and therefore the errors) made by the individual trees need to have low correlations with each other.

You can achieve these two prerequisites the the application of two processes: “bagging,” and “feature randomness.”

The Random Forest Algorithm uses “bagging” to make simple predictions. This is the process of training each decision tree in the random forest. You base the training on a random selection of data samples from the given training dataset with replacement.

You may want to split a parent code into children nodes in a normal decision tree. Evaluate every possible feature in the training set. Then, apply the feature that produces the most separation between the left and right child nodes.

The image in Fig. 5, below, demonstrates this idea of feature randomness for making predictions in a way that can be easily understood. 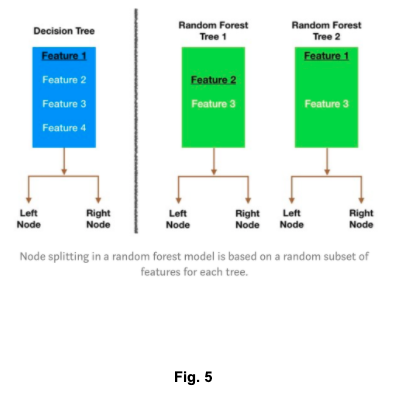 Putting It All Together

1)  Obtain all of the training data that is going to be used to build decision trees in the random forest.

2)  Determine the number of decision trees that you would like to have in the random forest.

3)  For each decision tree in the random forest, apply the concept of bagging to obtain the dataset that would be used to train it.

4)  Train the decision trees in the random forest with their respective datasets.

6)  Count the number of occurrences of each distinct prediction.

7)  The prediction with the most number of occurrences is provided as the final prediction of the random forest.

Code for the Random Forest Classifier

I hope that through this tutorial, you can now build your own random forest classifier to make simple predictions.

Navigating Black Friday and the Holiday Shopping Season in 2020