Microservices: some people love them for how they can break monolithic applications into more manageable, distributed services; others hate them because of the complexity that can arise trying to coordinate dozens of distributed services just to accomplish a simple task. Wherever you may sit along the love/hate spectrum, there’s no denying that distributed software architecture has been significantly impacted by the rise of microservices, which encourage reusability of components. 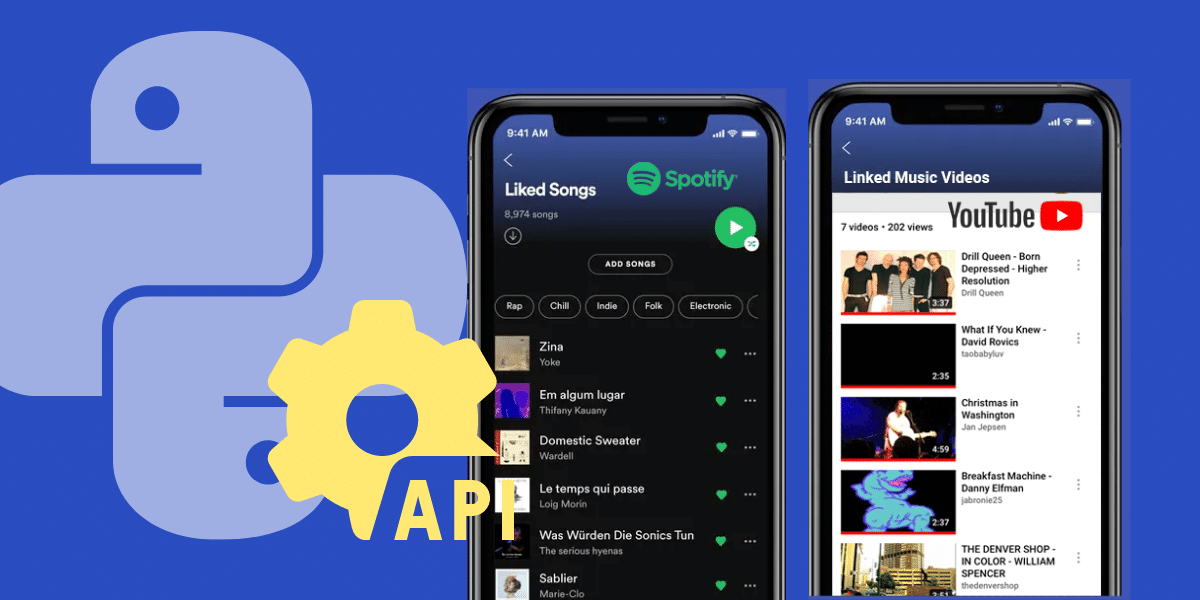 In this tutorial, I’ll introduce the concept of microservices architecture and why Python is a great choice for creating microservices. But the best way to learn about microservices is to build one, so that’s what we’ll do:

Before You Start: Install The Spotify Videos Python Environment

To follow along with the code in this article, you can download and install our pre-built Spotify Videos environment, which contains a version of Python 3.9 and the packages used in this post.

For Windows users, run the following at a CMD prompt to automatically download and install our CLI, the State Tool along with the Spotify Videos into a virtual environment:

For Linux users, run the following to automatically download and install our CLI, the State Tool along with the Spotify Videos into a virtual environment:

The evolution of microservices spans some three decades, starting with:

As with any buzzword, though, the term microservices has been used, misused, and abused. In general, a true microservice:

Python is a great choice for implementing microservices, not only because of the great benefits of the language itself, but also because it lends itself well to use in microservices architecture, via:

Spotify is a great way to get introduced to new songs, but I often wish I could check out the music video that goes with them. I can always plug the name of a song into YouTube and see if I get a hit, but that’s more of a distraction than I’m usually willing to commit to. But what if I could get access to both the song and the video with a single click?

Imagine a microservice whose sole purpose is to find the most relevant YouTube video for the top 50 songs on the global playlist in Spotify. This microservice will:

The following diagram shows the system context diagram for the microservice: 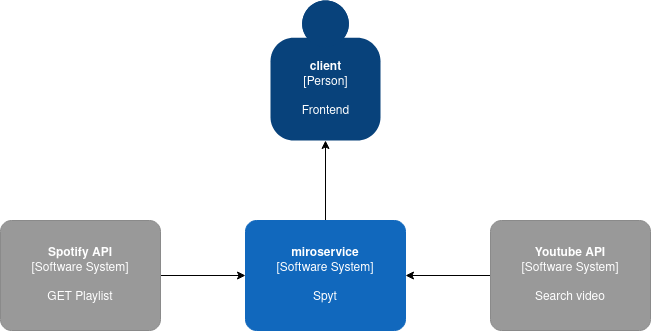 To accomplish the tasks in the above diagram, you’ll need to:

The following code shows the core logic in our sample microservice, which queries the APIs and returns the results:

As you can see, the first lines:

The logic in our microservice is pretty straightforward, but you can improve it by doing asynchronous calls to the YouTube API and handling exceptions properly. For the sake of simplicity, we’ll just write a function to wrap the logic around a Flask HTTP (synchronous) endpoint:

This function has two interesting points:

When you run the Flask application, a development server running the http://localhost:5000/apidocs endpoint will give you access to the API wrapper around the microservice logic: 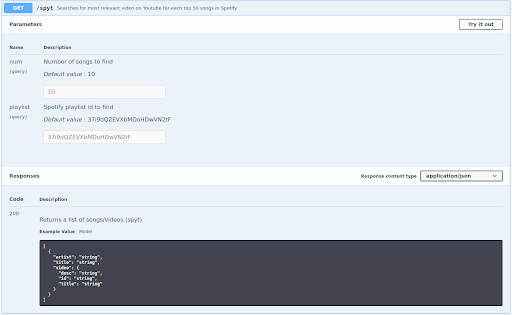 This graphical representation of the GET method shows the parameters, types, and default values, as well as the expected response structure and HTTP code. It also lets you try the service directly from the browser.

Microservices should be self-contained and independently tested. To add a simple test for our microservice, we’ll use pytest to create a test_app.py file and add the following code:

The test structure is simple enough:

To run more detailed tests, you should include assertions of the error codes and test invalid params again. You can run the tests with a simple command line call:

Continuous integration (CI) is a process that involves building and testing software automatically in response to changes in the source code that get pushed into a repository. Microservices are the perfect use case for applying (CI) since they are self-contained, and should include a configuration for CI.

Fortunately, you can find a utility to run CI workflows in GitHub’s publicly-hosted repositories. All you need to do is add a .github/workflows/flask.yml file to configure a basic dependency/build/test action:

The workflow is fairly easy to understand. The actions run in a waterfall mode each time the main branch of the repository is pushed, and you will receive a notification email after each execution. You can also link the results of the continuous integration to the README to get instant feedback about the status.

Microservices are usually simple to get started with, but difficult to master. Just remember the core pieces you’ll need:

Given the above, coding the logic and building the project should be easy.

While we stopped with CI in this tutorial, the final step for a full microservice is deployment, which can also be automated via Continuous Deployment (CD). Of course, once you deploy an application with a microservice architecture, you’ll need to deal with the heterogeneity and complexity inherent to distributed systems.

Microservices increase in complexity from implementation to operation. It’s not easy to deal with that complexity, but there are many services that can help. You might want to start by reading some articles that recommend starting with monolithic code, and then applying patterns to migrate them to microservices only after the requirements are stable:

For more information about implementing microservices effectively, refer to these articles on fullstackpython.com, vinaysahni.com, and realpython.com. 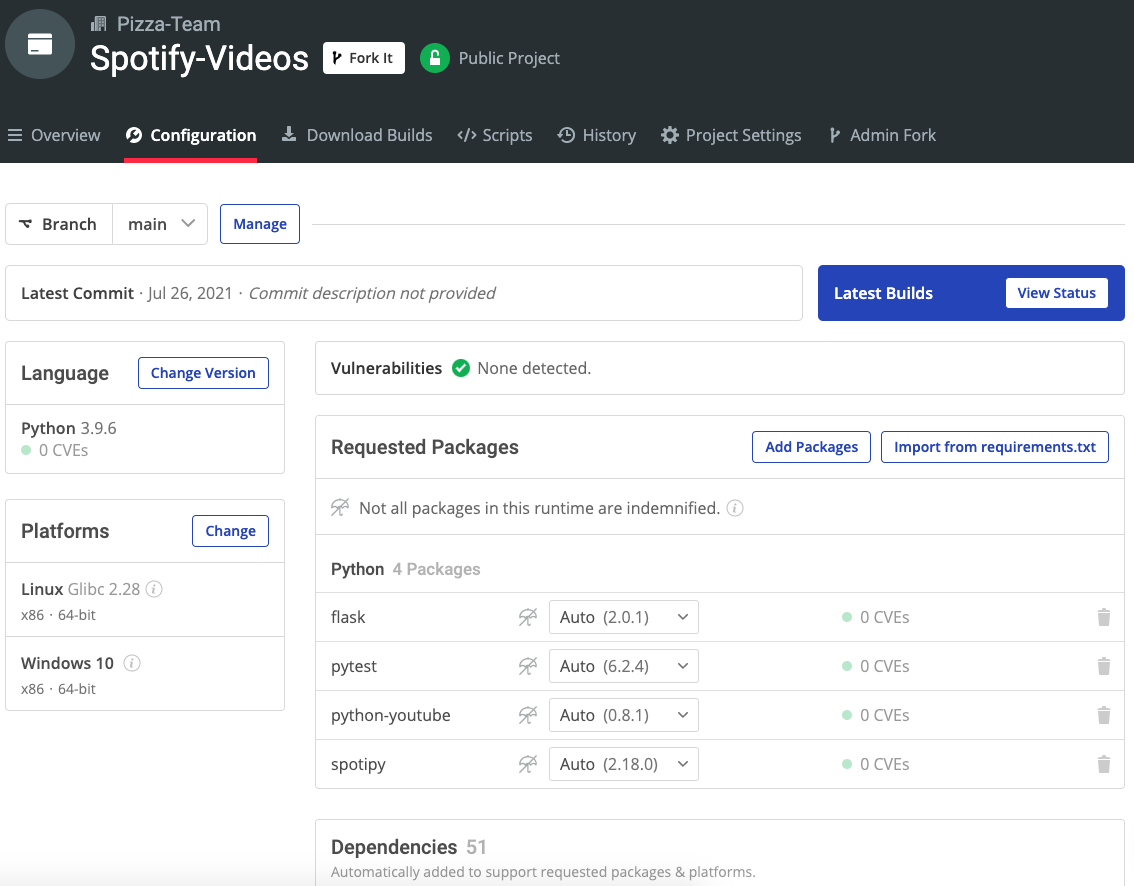 How to monitor Cassandra database clusters