The growth and democratization of containers in the past two years has been impressive. But how have containers impacted IT Ops? We wanted to discover the benefits and issues as IT teams deploy containers, which have become a critical part of every developer and IT-modernization discussion.

A survey of 648 IT and DevOps professionals we conducted highlighted which business benefits users seek by deploying containers, which workloads are being containerized, and what their experience has been with stateful containers. We then further analyzed how IT teams’ perspective changed as they increased their container adoption.

The survey found that agility (75 percent) and reduced costs (53 percent) were the top container benefits that users sought, followed by performance (40 percent). The survey also revealed that 55 percent of IT professionals would deploy stateful containers within one year if they could resolve storage challenges. 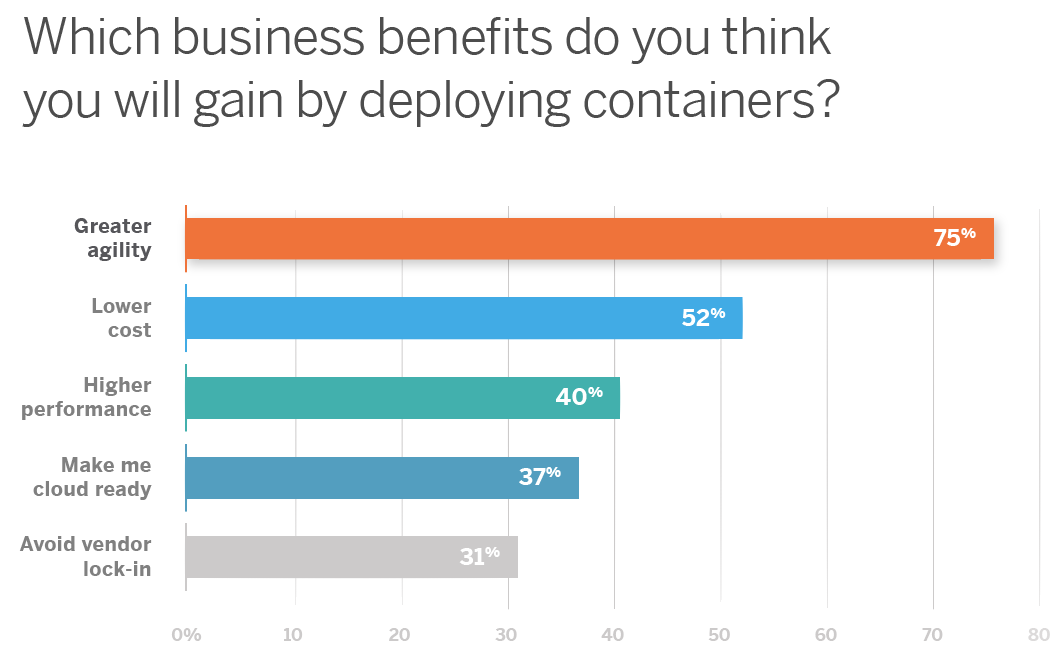 Databases (52 percent) and web (48 percent) are the two application workloads IT professionals are looking to containerize as quickly as possible, followed by batch processing (44 percent) and big data (32 percent).

Other findings from the survey include:

We further analyzed the survey data to gain deeper insights into the workloads and challenges as IT increased their container adoption. That analysis revealed:

I see that the survey reinforces what customers are asking us to solve. They want the benefit of containers for all types of applications, stateful and stateless. IT wants their data management solution to handle more sophisticated scenarios at the container level. They are also seeking a wide range of features for their data solutions, such as automatic provisioning, hybrid capabilities and DevOps integrations; none of these are available from legacy storage solutions.

To learn more about the survey findings, visit the results post on our blog or download the survey infographic.


Eric Han is vice president of product management at Portworx. Previously, he was the first product manager for Kubernetes and the Google Container Engine (GKE), as well as senior business development manager for Google Cloud. He earned BSEE and MS Engineering degrees from the University of Illinois at Urbana-Champaign and an MBA from the University of Pennsylvania’s The Wharton School.