Developers are always on the lookout for tools and technologies that make them more productive. The next library, framework, programming language, IDE, or approach that boosts productivity by a measurable factor, quickly sees a spike in adoption. Likewise, tools that hardly boost productivity, experience a rapid decline in the number of users. Visual Studio Code is a perfect example of such tools, and the primary focus of this article.

VS Code  is a lightweight, powerful, open-source code editor from Microsoft based on the Electron framework. It comes with code completion, Git integration, and code snippets amongst other features. The editor is available for the major platforms (macOS, Linux, and Windows). The project was announced in 2015 and has seen a massive adoption in the developer community. The VS Code GitHub repo has over 78,000 stars and is in active development. Stack Overflow’s 2019 Developer Survey reported VS Code as the most popular development environment with a 50.7% usage among all developers. That may not look at all convincing until you compare it with the 7.2% usage reported in the 2016 survey.

For an editor to rapidly become the top choice in the developer community is a great feat. In this section, we see some of the features that make VS Code standout among the competition.

A big plus for VS Code users is that the software receives free monthly updates from Microsoft. These updates come with some vital fixes to bugs as well as introduce essential and cool features of the program. Updates are well-documented to make it easier for users to take advantage of new features. Microsoft even has an “Insiders” version for those who want to always have the best and latest features. This version and the stable version can be installed on the same computer. 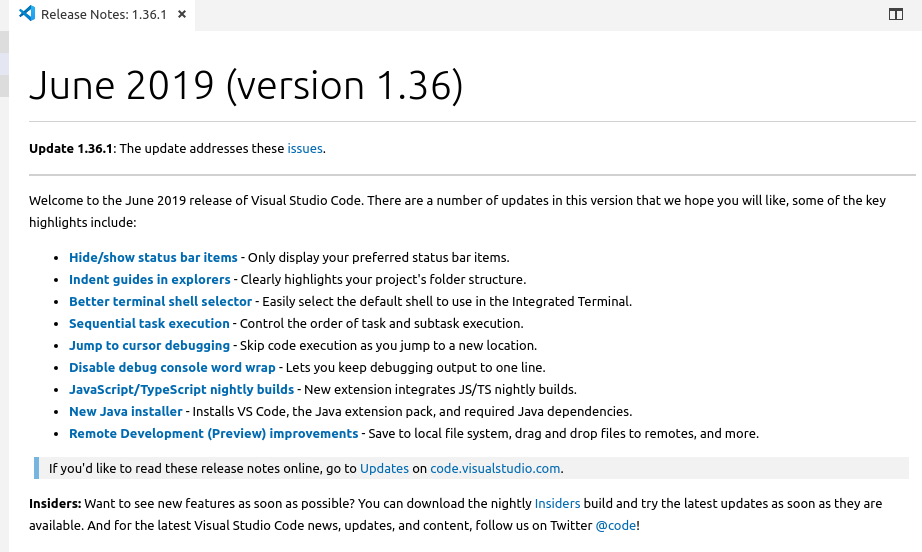 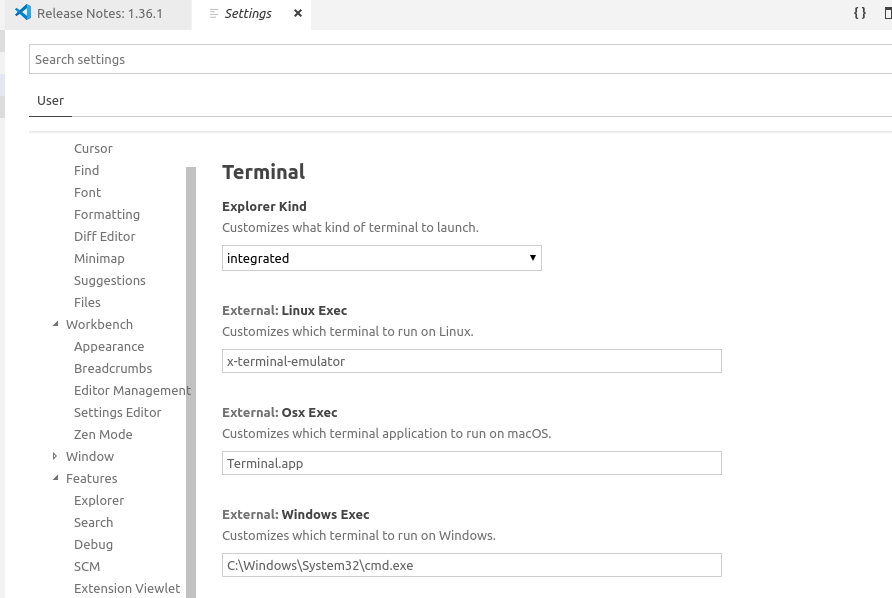 VS Code is a simple language-agnostic code editor you can quickly turn into a sophisticated and powerful IDE thanks to the myriad extensions. The Visual Studio Code marketplace is a great place to find tons of extensions from top companies and developers. The Extensions API allows developers to customize every part of the program including themes, programming languages, and beyond.

Although VS Code is language-agnostic, extensions can be installed to turn it into a full-fledged IDE with superpowers. The ms-python.python extension, for instance, brings rich Python language support to the editor including features such as debugging, linting, Jupyter support, and snippets. Not surprising, the extension has over 55 million downloads so far. Whether you rely heavily on GitHub for version control and code sharing, Docker for service management, React for building beautiful user interfaces, love working with dark themes to ease eye strain, or like to experiment with Rust. You can be almost certain there’s a VS Code extension that helps you do just that. In the rare case there isn’t one, you can take advantage of the Extensions system to build it.

Starting with VS Code

Installing and configuring VS Code is quite simple and straightforward. Head over to the official website to get the installer for your OS. 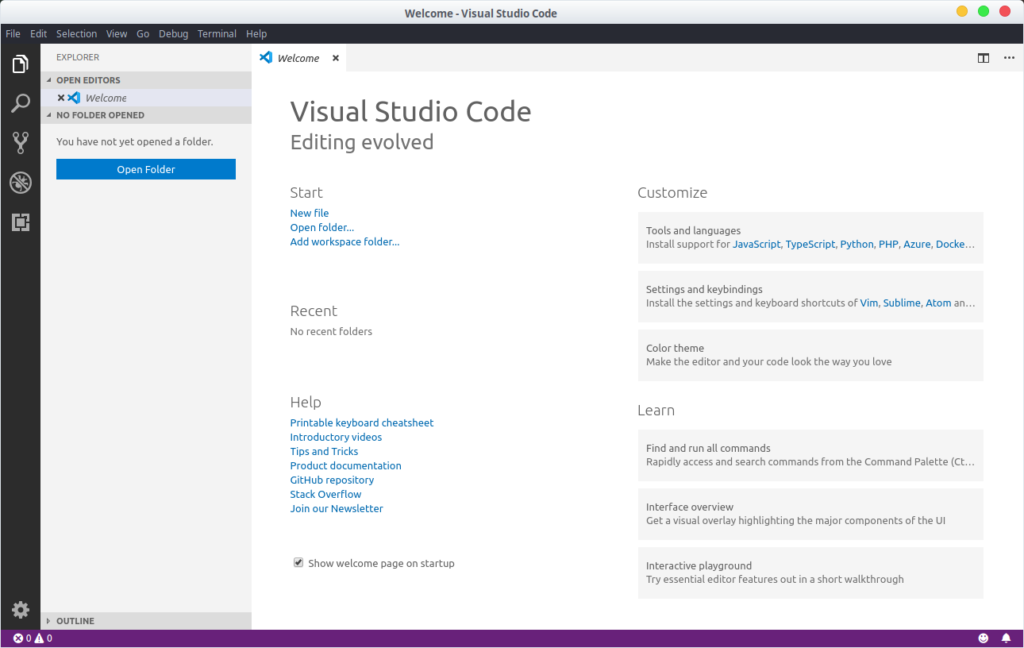 Navigating the application is quite intuitive. From the side pane, the last icon opens extensions allowing users to search and install relevant extensions. Go ahead and install some extensions for your preferred language and write a simple program. An excellent extension is Code Runner (formulahendry.code-runner). This extension helps you run many programming languages such as C, Elixir, Java, Go, Rust, and even less popular alternatives like Crystal, Haxe, and Kit. 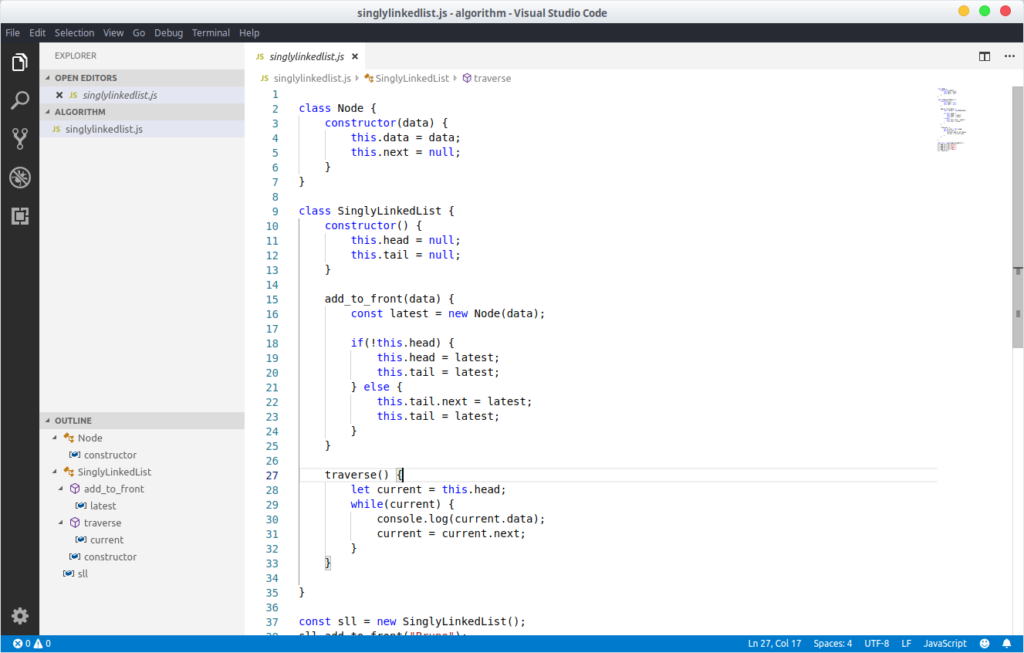 VS Code has an exciting roadmap you should check out. In this article, I’ve introduced VS Code briefly. It is my primary IDE. I can do virtually every type of dev work in VS Code from testing UI in the browser to using Slack in the editor – amazing! If you haven’t used VS Code before, go ahead and install the editor and share some of your best experiences and extensions in the comments. Happy hacking!

What Does Kubernetes Mean for Software Testing?


What to Look for in a Secure Container Registry