So you’re developing an app with Vue, and you want to make sure it performs well. Good for you — Performance optimization is a key consideration for any kind of programming (or it should be, at least).

On the other hand, if you take the wrong approach to performance optimization by trying to optimize your code at the wrong stage of development, or focusing on the wrong optimization strategies, you could end up shooting yourself in the foot. That’s the risk that Donald Knuth had in mind when he famously said that “premature optimization is the root of all evil.”

When approached with the right mindset, performance optimization doesn’t have to be a drag. In this article, I highlight several effective strategies that you can use to optimize Vue apps without getting your feet stuck in the mud by worrying about the wrong things.

In order to ground this discussion of Vue performance optimization and limit its scope, we’ll focus specifically on optimization tools and strategies for single-page Vue apps.

Before we explore some strategies related to Vue performance optimization, we need to enable some special tools that measure performance metrics and give important information about possible unoptimized paths. We enable those tools in the beginning of our experiments to gauge the first or baseline performance score of our apps. Then, for later runs, we run them again to see if there are any sufficient improvements. We do that to make a record of the changes and compare the differences.

Currently, there are two important tools that we can use to measure the performance characteristics of our Web applications: 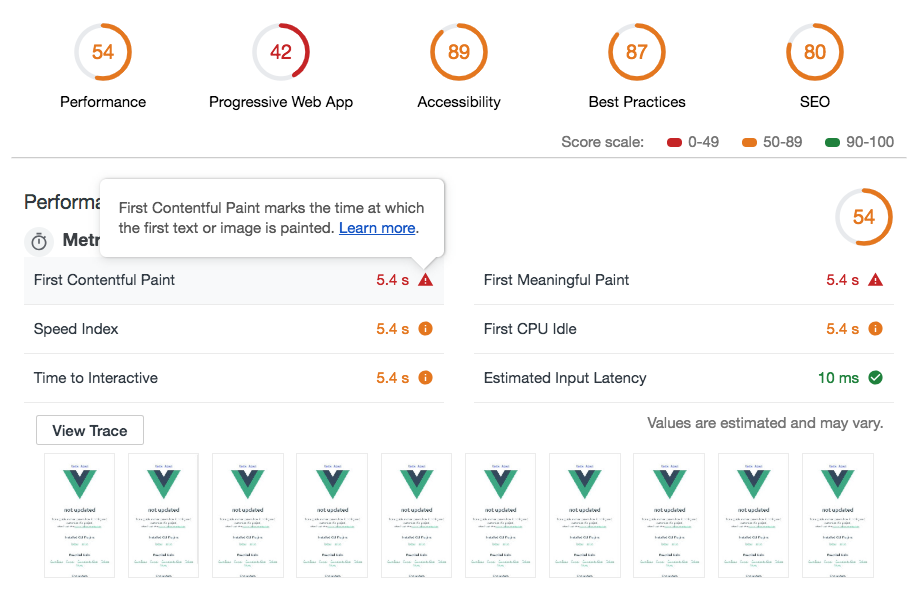 All the important performance metrics together with their documentation are shown in the first section for reference.

If you open the developer tools panel and navigate to the Vue performance tab, you will see the following report: 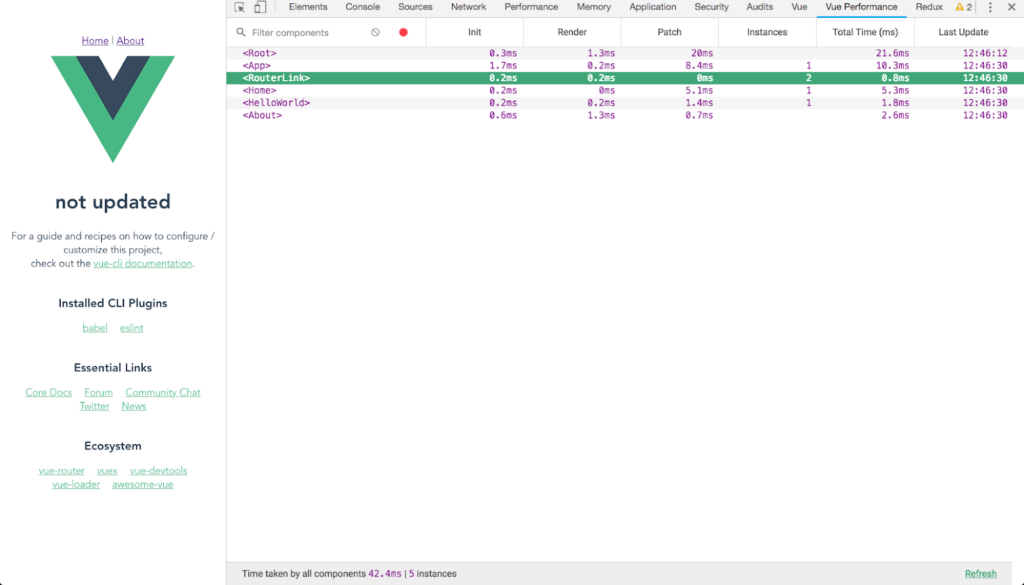 You can use the metrics to pinpoint delays or bottlenecks that occur in your Vue component lifecycle.

There are several ways we can improve the performance of Vue applications. Some of the techniques do not require changing anything real in our code — only to revisit some key points of our application build and runtime phases. As a general suggestion, we should always take any performance strategies with a pinch of salt and always verify the outcomes based on the audit reports. 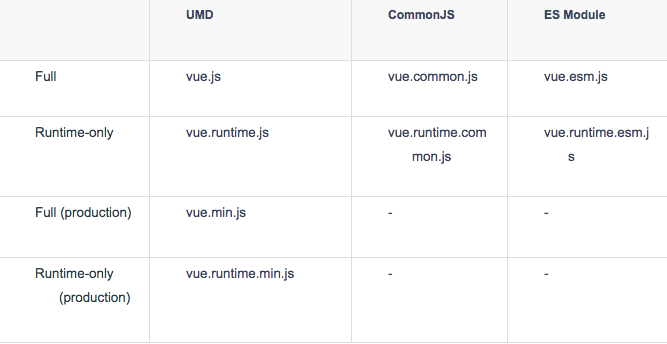 It makes sense to use the runtime-only build option, as it’s about 30% lighter, meaning loading and parsing is faster than the full build. This will improve the Time-to-Interactive metric in your Lighthouse metrics. If you use a modern bundling tool like Webpack, by default, it uses the runtime build, as all the templates are precompiled during the build phase to render functions. If you don’t use a build system, it is recommended to convert any string templates to render functions via a plugin like babel-plugin-transform-vue-template to avoid the cost of loading the compiler.

The app.js contains the client-side code for all components — even that which is not visible on the screen.

When we enable dynamic imports, we only have to reformat our import code to look like this:

For every dynamic import statement we declare, Webpack will create a new chunk with that name and load it on demand. If we were to switch routes and load another page, the components would load only for that route. In practice, when we have a lot of routes, this saves a lot of transmission bytes over the network. (It’s worth a look.)

Below is the same Lighthouse report after using dynamic imports — We gained 7 points in the performance tab! 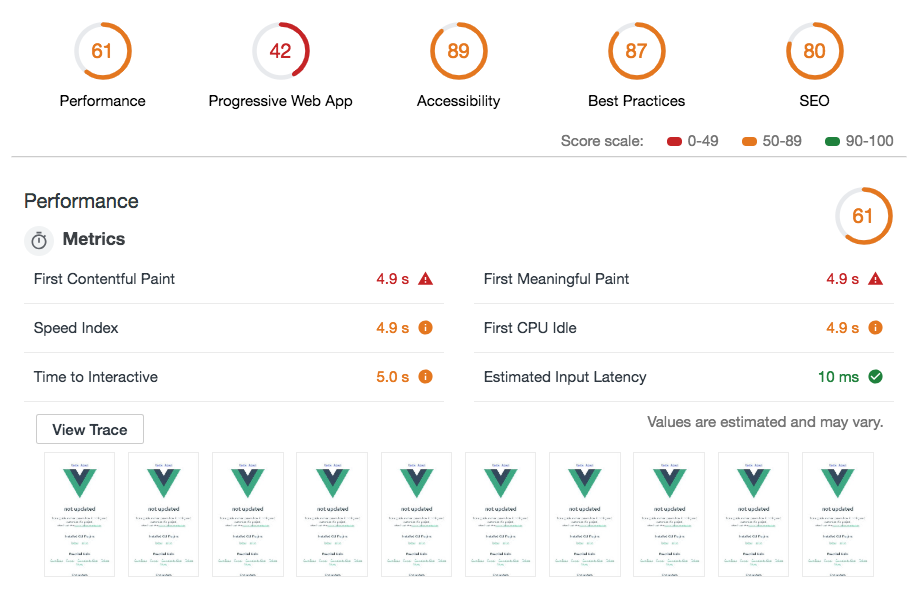 This, for example, will create the following assets containing basic HTML that will load the rest of the resources:

Rendering large lists using virtual scrolling. Whether we are using React, Vue, Angular or plain JavaScript, rendering big lists at once can hamper our applications enough to make them unresponsive. This is because the fundamental diffing algorithms that all those frameworks use work based on some assumptions. If we fail to meet those assumptions, then performance will degrade substantially. In these cases, we can be more efficient by making sure we render only the visible items on the screen, and recycle the old ones. For example, instead of rendering 1,000 items, we render only the first 20 visible ones. As the user scrolls, we replace the old items that are not yet visible. For example, this is what the vue-virtual-scroller library does effectively (as you can see in the demo below):

The advantage of this approach is that there are no wasted cycles on re-rendering when users interact with the list.

If you want to enable it again, you have to remove that modifier.

One last thing to mention is the importance of YAGNI (or You Ain’t Gonna Need It). It’s very easy to also go overboard and apply every technique you find in the wild. Sometimes the best advice is to simplify your code, pinpoint any inefficiencies in the code, and offer a better alternative. Above all, you need to keep the codebase consistent, readable, and easy to change, allowing only absolutely necessary tweaks and refinements.

Having an interactive Vue.js application that behaves like a well-oiled machine is a good thing. After all, you will have to deliver Web applications that are faster to load, faster to run, and have no obvious bottlenecks. This transition will not happen in one night. By taking small incremental steps that improve the overall interaction performance of your applications, you can enable a better experience for your end-users that will deliver real value.


Intro to Contract Testing and Getting Started With Postman