In Monitoring and Observability
architecture · splunk

In the context of software applications and services, a system is referred to as “highly observable” when no further instrumentation and telemetry is needed in order to determine the state of the system. In other words, a system is observable when its status can be easily determined and the potential location(s) of trouble spots (if any) can be narrowed. Observability is becoming increasingly important as organizations move to cloud environments and systems become more complex through the utilization of modern software architectures.

Let’s take a look at some of the modern architectural approaches to applications and why observability is a must for meeting your objectives for software applications in production.

For many years, software development organizations mostly took a monolithic approach to application design. All layers of the system were tightly coupled, with all functionality living in a single code base, written in a single language, or at best, a client-server model offering tight coupling between two sets of code. These applications were typically deployed to a set of on-premises production servers, leaving developers and IT personnel with large, centralized systems to support.

Contrary to the monolithic approach, a microservice-based system is made up of a series of independent components known as services. Each service runs separately and is responsible for its own subset of functionality. The services communicate with one another in a loosely-coupled manner, and their interactions define the system as a whole. Microservices are quite common in request-based applications (like ecommerce) and are heavily utilized in cloud environments. 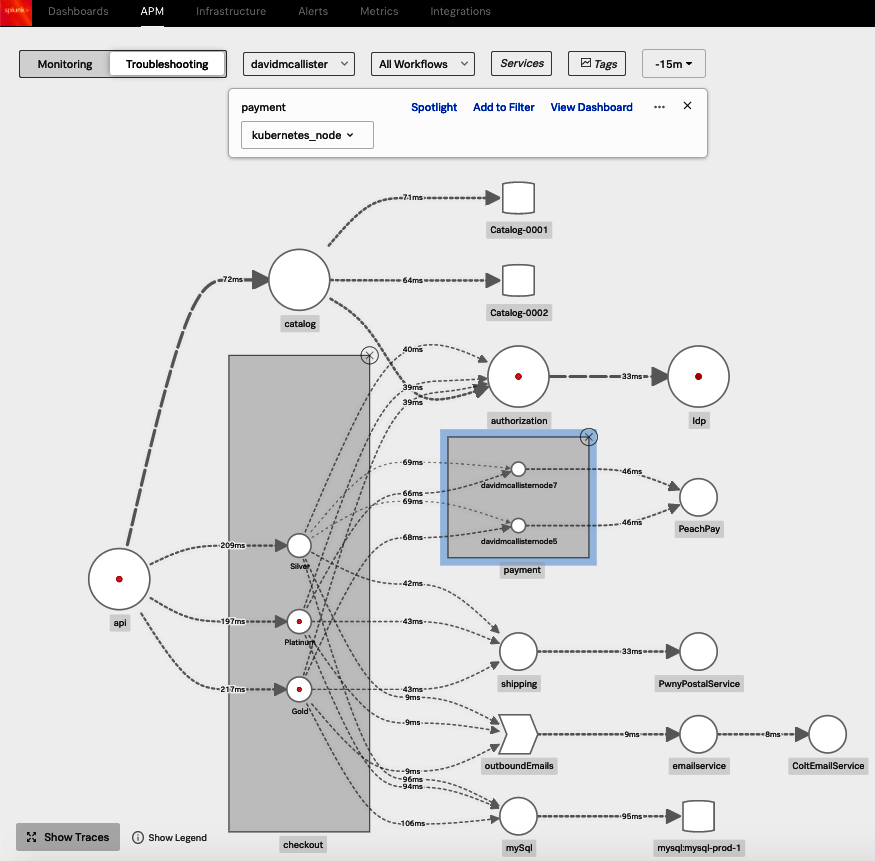 The loosely coupled nature of the system is beneficial in several ways. For instance, DevOps teams can easily spin up additional instances of certain services when necessary to meet the demands of the business. Additionally, microservices can be continually improved and deployed independently of one another, reducing risk by limiting the amount of functionality being touched with each individual deployment. Furthermore, the loosely coupled nature enables increased resiliency within the system. Since any service can be independently (and elasticly) scaled, resiliency is also improved When one service goes down, the others do not. This often allows the system to maintain some level of functionality while the problematic service is revived.

Another example of a loosely coupled application design pattern is an event-driven architecture. With this approach, a change in state triggers the creation of an event by an event producer. These events are detected by one or more event consumers which react to the events accordingly. For example, when an item is added to a customer’s cart in an e-commerce platform, an event producer could trigger an event detailing that action. An event consumer, meanwhile, might subscribe to this producer and update the inventory to reflect the change in product availability. Event-driven architectures often make use of messaging, and are deeply loosely-coupled, as event producers do not which consumers might be listening, nor what the outcome of the consumer action may be. 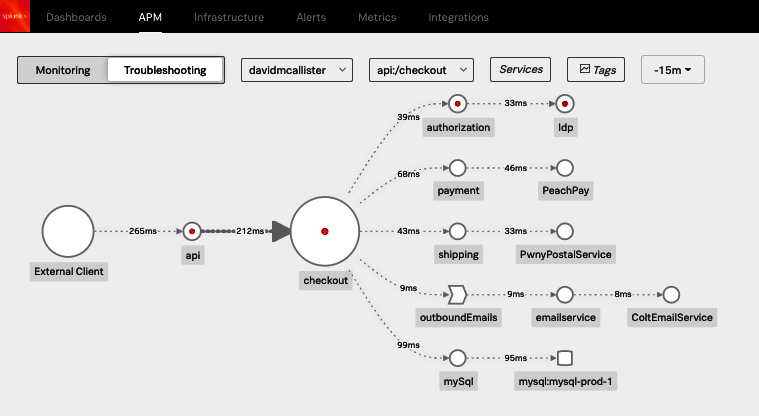 As with microservices, producers and consumers are managed independently of one another, and this decoupled nature enables development organizations to achieve the same resiliency, scalability, and maintenance benefits described above.

Considering the advantages described above, it’s hard to imagine that there are any drawbacks to utilizing these more resilient and scalable modern design patterns. However, the same decoupled nature that provides so many advantages also creates additional complexity which can diminish a DevOps team’s ability to effectively monitor infrastructure and application state as well as to properly identify and resolve the issues that will inevitably arise.

Loosely coupled software systems are highly distributed across the organization’s infrastructure. This distribution enables a high level of resiliency, but it also makes it difficult to gain a holistic view of all application components. 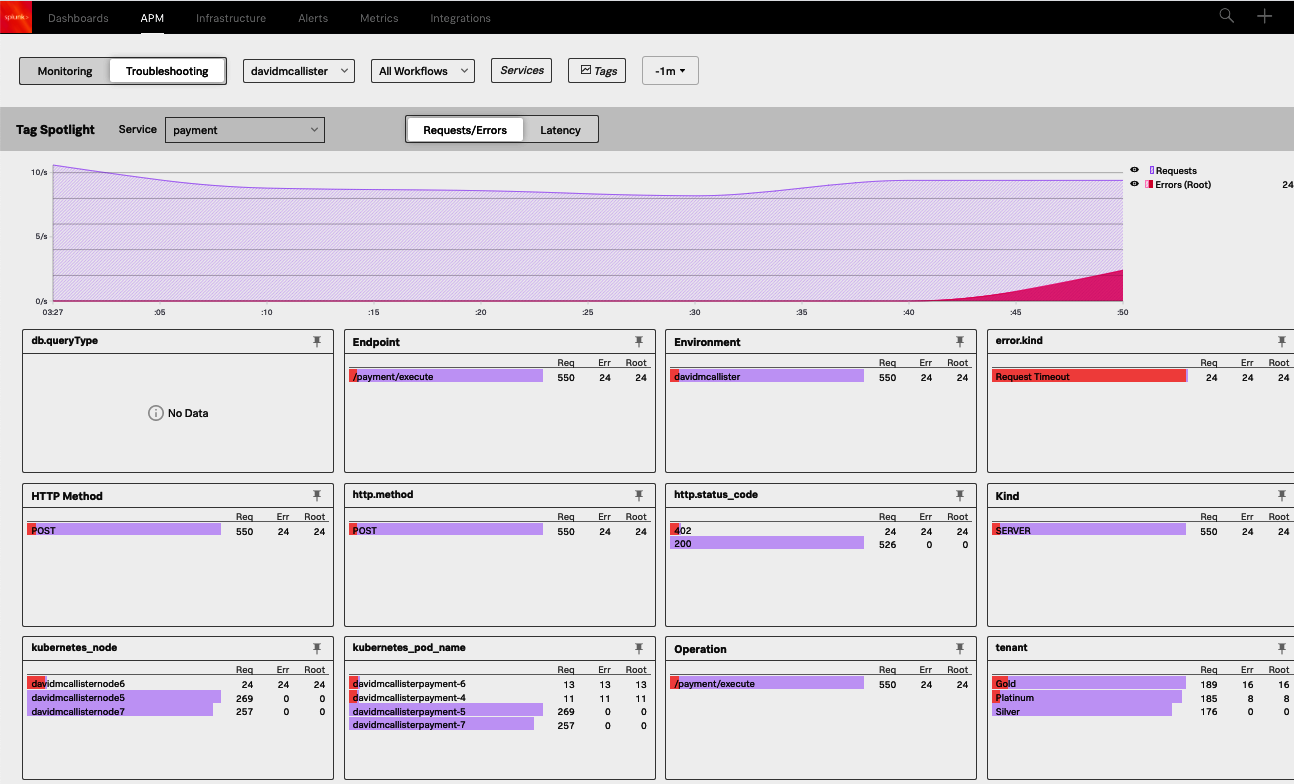 Let’s think about this from the perspective of microservices. A single request to a microservices-based system may traverse a hundred or more services running across a distributed cloud infrastructure and log request information to a great number of locations, making it nearly impossible to correlate events and effectively trace problematic requests. In the instance of slowness or failure, where do development and IT teams begin when trying to determine the root causes? How can they comfortably evaluate the system’s health and performance? The answer to both questions is to make the systems as observable as possible.

The “How” of End-To-End Observability

When systems are highly observable, DevOps personnel can efficiently evaluate the state of the system, which enables them to monitor its health, rectify issues, and improve applications over time. This can be accomplished by maximizing visibility across all components of the system.

One way to increase visibility within a modern system is to centralize log management. This involves ingesting log data from all services using a modern log management platform. Bringing the data together allows DevOps teams to analyze data easily, as opposed to futilely trying to derive insights from disparately structured log data spread across dozens or even hundreds of sources. Through centralized log management, DevOps teams can gain a holistic view of critical system details from a single, centralized location.

Along the same lines, distributed tracing can help provide a better, more holistic view of a user’s journey through a service-oriented application. With distributed tracing, trace IDs are leveraged to enable DevOps teams to isolate individual requests as they traverse multiple services. This type of event correlation makes it significantly easier to identify the problematic component in the instance of slowness or failure.

Additionally, infrastructure and application monitoring (especially those infused with AI-driven capabilities) function by collecting and contextualizing performance metrics and alert data. When this is performed across all system components, it will greatly increase visibility and provide valuable insights into overall system health. Furthermore, real-time alerting and contextualized alert data both enable DevOps teams to identify threats to system reliability at the earliest possible moment (reducing MTTD) and to respond to those incidents in a timely manner (reducing MTTR).

As mentioned earlier, visibility drives observability. With modern software architectures, however, end-to-end visibility can be a challenge to achieve.

To address this complexity, DevOps teams can employ modern platforms that have the ability to adapt to these loosely coupled system architectures. Observability platforms (such as this one from Splunk) contain the functionality necessary to facilitate effective processes for infrastructure monitoring, APM, and log management in distributed software systems. By leveraging these processes to gain meaningful insights into system performance, incidents within these modern applications can be identified and resolved with greater efficiency, and opportunities for system improvement can be properly evaluated and prioritized.

Modern application architectures significantly increase resiliency and scalability while simplifying the processes for system modification and deployment. However, the increased complexity introduced by these architectures means that achieving end-to-end observability is more important than ever for DevOps teams.

Want to learn more about observability? Check out Beginners Guide to Observability.

Automating Data Preparation With Modern Tooling Like Snorkel And OpenRefine